Low-power chips are mounted in SMT packages and moulded type LEDs; while with 1 mm2 high-powered chips, the SWIR D-Series can be mounted in EDC, SMBB, and TO-66 packages. For the majority of wavelengths, a two-fold improvement of output and efficiency is attained; however, the high-power versions have ramped up their forward current to 1 A and gain a boost of up to four times the original radiated power output. The resulting efficiency improvement gives operators the opportunity to enjoy cheaper power output, thereby reducing the overall cost per Watt.

As a part of the ever-changing solid state lighting (SSL) sector, the list of applications for SWIR is evolving and expanding continuously. To serve its customers best, Ushio offers a wide range of SWIR wavelengths (1000 nm – 1750 nm) and many customisation options, such as multi-chip packages or the output of specific wavelengths. This ability to create the perfect SWIR LED for each individual application bestows Ushio’s renowned solution versatility upon the Epitex D-Series.

The Kyoto-based developers of the Epitex D-Series, Ushio Opto Semiconductors, Inc., have found great success in the optical semiconductor device business. This has led to the company becoming fully integrated into its parent company, Ushio, Inc., as of 1st April 2020. The new D-Series marks another record-breaking foray into the solid state lighting (SSL) sector for the Japanese firm.

Following the successful release of the Spectro Broadband LED Series, Ushio is no stranger to world records and first-time breakthroughs. Ushio has also committed to offering the most comprehensive range in speciality solid state lighting. The Epitex LED range covers UV, visible, NIR, and SWIR wavelengths between 365 nm and 1750 nm and relies on over 30 years of experience in chip and packaging technologies. Chip technology includes bespoke design, in-house epitaxial growth, and device processing; while packaging technology brings optics design and thermal management techniques. Epitex offers EDC, SMBB, SMT, and multi-chip SMT standard packages alongside many others.

The SWIR D-Series, which is based on InGaAsP semiconductor wafer technology, is not the only SWIR LED series to receive an upgrade. The SMBB1050GD-1100 high-power SWIR LED uses GaAs wafer technology to achieve a 1050 nm wavelength with an increased output power of 700 mW at 1 A. This latest update exemplifies how Ushio returns to the drawing board to improve on its past successes. 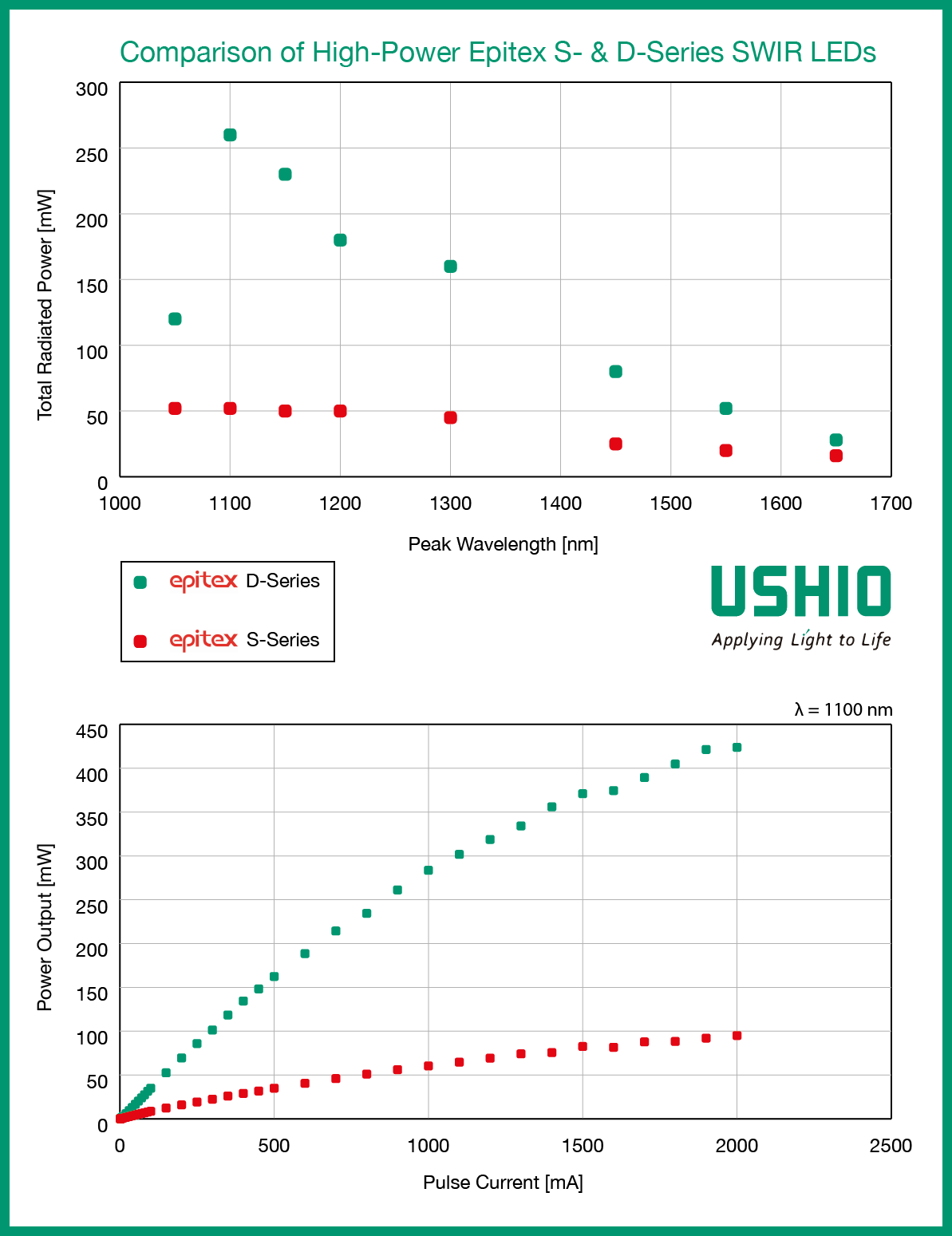 To begin your EMEA sales enquiries regarding Epitex SWIR LEDs, Ushio Europe’s SSL Sales Director, Ardan Fuessmann, can be reached via our contact page. Mr. Fuessmann is readily available to discuss all your solid state lighting needs and is happy to guide you through our entire LED and laser diode portfolio.