Ushio Europe specialises in the production and supply of emitters located in the ultraviolet (UV), visible, and infrared (IR) wavelength sections of the electromagnetic radiation (EMR) spectrum. While the term ‘light’ may conjure notions limited to the visible spectrum, Ushio has accumulated immense competency in the manufacture of light sources that cover these wavelengths, as well as those that irradiate light within the invisible sectors. From extreme ultraviolet (EUV), through visible illumination, to the short-wavelength infrared (SWIR) region, Ushio puts you in control of the exact wavelengths required for every application.

What are light wavelengths?

The wavelength of a light source is defined by the size of the gap between the two identical peaks or troughs of two consecutive waves. To quantify this distance, the accepted unit of light wavelength measurement is the nanometre (nm). In physics and mathematical equations, wavelength is mostly represented by the Greek letter lambda (λ) where it is calculated by dividing the phase velocity (v) of a wave by its frequency (f ): λ = v/f.

The wave theory of light was established by the Dutch physicist, Christian Huygens, in 1678. Other important contributions to this discovery came later from English polymath and physician, Thomas Young, and the German theoretical physicist, Max Planck. Young faced particular scepticism from fellow scientists, due to the controversial contradiction of Isaac Newton’s Corpuscular theory of light which assumed that light was a particle.

After debate spanning hundreds of years over whether light was indeed a particle or wave, it fell to Albert Einstein to prove that light does, in fact, exist as both! It was his expansion of Planck’s quantum hypothesis, which identified light as a particle called a photon and that the flow of photonic particles propagates in waves. Einstein’s conclusion resulted in his famous light quantum theory and was later recognised as the father of quantum mechanics. Albert Einstein was awarded the Nobel Prize for Physics in 1921.

The characteristics of light vary at different wavelengths and Ushio has spent over half a century researching and defining every nanometre of ultraviolet (UV), visible (VIS), and infrared (IR) light. This commitment has allowed Ushio to exercise such control over light that it becomes the perfect tool for a multitude of applications.

What is ultraviolet (UV) light?

The UV section of the EMR spectrum was discovered by the German Physicist, Johann Wilhelm Ritter, in 1801. Following the discovery of infrared “heat rays” by Herschel the previous year, Ritter was convinced that there must be an opposite “cooling ray” at the opposite end of the spectrum. While his search for polarity was slightly misguided, he did eventually discover that the light-sensitive compound silver chloride’s transformation from white to black was expedited when placed in the dark region just beyond the violet light range.

After discovering that this invisible sector of the spectrum caused the most impressive reaction of all, Ritter named his new type of light “deoxidising rays”, and later as the sector expanded to include the neighbouring violet-blue rays “chemical rays”. The terms remained popular throughout the 19th century, but were eventually phased out in favour of the more restrictive and scientific term “ultraviolet”. The prefix ultra- means “beyond” in Latin.

UV radiation can be used to trigger chemical reactions that are induced specifically by ultraviolet irradiation to decompose, synthesise, and polymerise organic materials. The inherent qualities of certain UV wavelengths make them adept in applications such as curing, disinfection, and photobonding. As UV occupies a ‘cooler’ sector of the EMR spectrum, it also lends itself better to the treatment of surfaces that would be otherwise sensitive, such as foils.

Ultraviolet (UV) light is electromagnetic radiation occupying the wavelength range of approximately 10 nm – 400 nm and can be divided into a number of sub-types in accordance with ISO standard ISO-21348.

At Ushio, the ultraviolet portion of the EMR spectrum has been divided as follows: 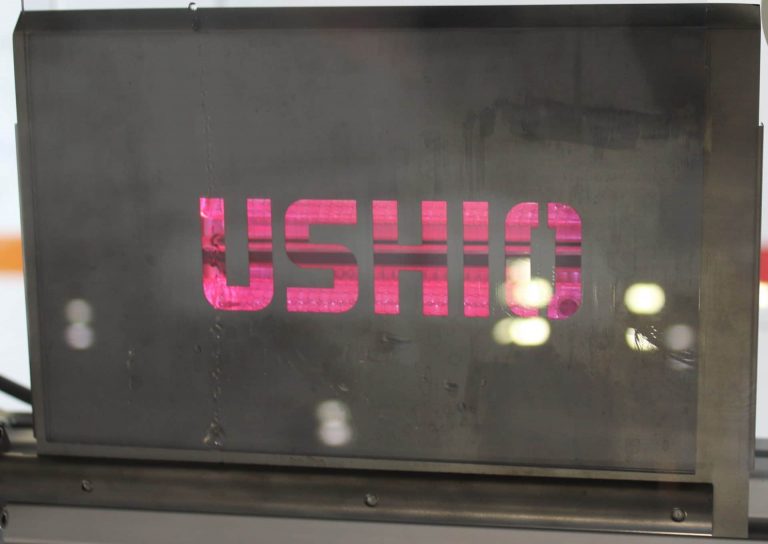 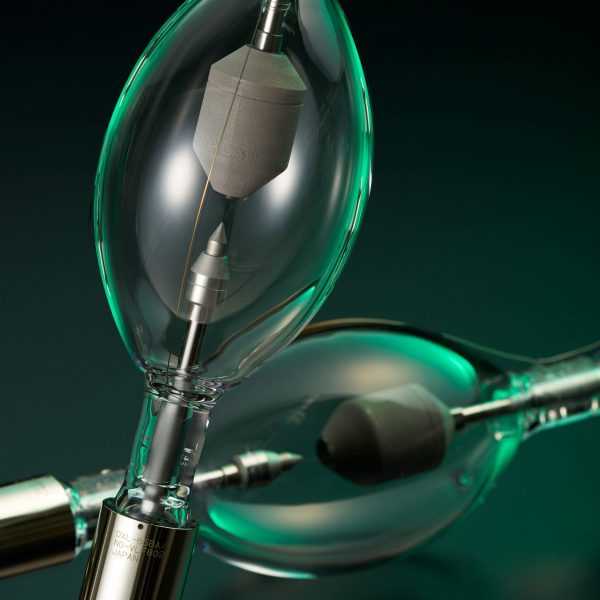 What is visible (VIS) light?

The region of the EMR spectrum that can be detected by the human eye is referred to as the visible light spectrum, or simply, light. Visible (VIS) light radiation occupies the wavelengths between approximately 380 nm and 750 nm, and generally consists of seven colours as perceived by the human brain. Violet has the shortest wavelength, while the final red section covers the longest visible wavelengths.

Theories surrounding the makeup of visible light have been around since the 13th Century, when an English philosopher, Friar Roger Bacon, surmised that rainbows were produced in a similar way to the refraction of light through glass and crystal objects. However it was the legendary English scientist, Sir Isaac Newton, who became a pioneer of optics when discovering the ability of prisms to disassemble and reassemble white light.

Although his identification of the original seven colours is still taught through the memorable mnemonic, ROY G BIV, modern spectrum divisions have been adapted slightly due to indigo being identified as a shade of blue-violet rather than its own independent colour.

Visible light is important to our everyday lives for the purposes of vision, but as our understanding of the visible spectrum has grown over the past centuries, it has been possible for us to pinpoint and improve the visible light sources we use today.

Ushio offers many visible light lamp solutions such as halogen and water-cooled xenon short arc lamps. The majority of such lamps are used for screen projectors, searchlights, solar simulation, and other fields of advanced technology.

Ushio has also amassed a huge selection of single-, multi-, and broadband LED’s that operate within the visible light range. The already vast epitex LED suite recently broke records with the introduction of the Spectro Series of broadband LED’s, which boasts a hyperspectral output of 400 nm – 1000 nm.

Visible light was the beginning for Ushio, back in 1964, so you can imagine the amount of knowledge and innovation that has gone into keeping Ushio at the top after all these years. For applications related to inspection, recognition, and processing across electronics, visual imaging, and life sciences, Ushio has the solutions at the right wavelength to make it happen for you.

What is infrared (IR) light?

The infrared sector of the EMR spectrum was discovered by the German astronomer and celebrated musician, Sir Frederick William Herschel, in 1800, just one year before the discovery of UV radiation. He used modified thermometers to measure the temperature of sunlight when separated into the colours of the visible spectrum by being directed through a prism.

After finding that the temperature increased from violet through to red, he was intrigued enough to measure the region just beyond the spectrum. This area was apparently unaffected by the sunlight due to the absence of visible light, however Herschel was shocked to find that this region was hotter than all previous readings.

After naming these newly detected “calorific rays”, Herschel was able to discover that the radiation existing in this invisible portion beyond red behaved much in the same way as visible light. This meant that the rays were still susceptible to absorption, reflection, refraction, and transmission, just like visible light. For the first time ever, someone had proven that there is a type of light that cannot be detected by the human eye. In the late 19th century, the term “calorific rays” was dropped in favour of “infrared radiation”. The prefix infra- means “below” in Latin.

The potential applications of IR technology continue to grow to this day. While previously gaining notoriety by enabling the creation of night vision equipment, infrared has become a staple in the fields of sensing and imaging. Thermography and hyperspectral imaging are made possible thanks to Infrared (IR) light is EMR inhabiting the wavelength range of approximately 700 nm – 1 mm (one millimetre), and can be divided into a number of sub-types, much in the same way as UV is. At Ushio, the infrared spectrum is divided as follows: products, and can be applied to many inspection and diagnostic processes.

The most popular industrial application has historically been heating, thanks to the ability of this light form to provide a rapid transition from cold to hot and vice versa. While this versatility is not often available from alternative heat sources, the operator is able to exercise precise, non-contact control of their heat source.

Infrared (IR) light is EMR inhabiting the wavelength range of approximately 700 nm – 1 mm (one millimetre), and can be divided into a number of sub-types, much in the same way as UV is. At Ushio, the infrared spectrum is divided as follows: 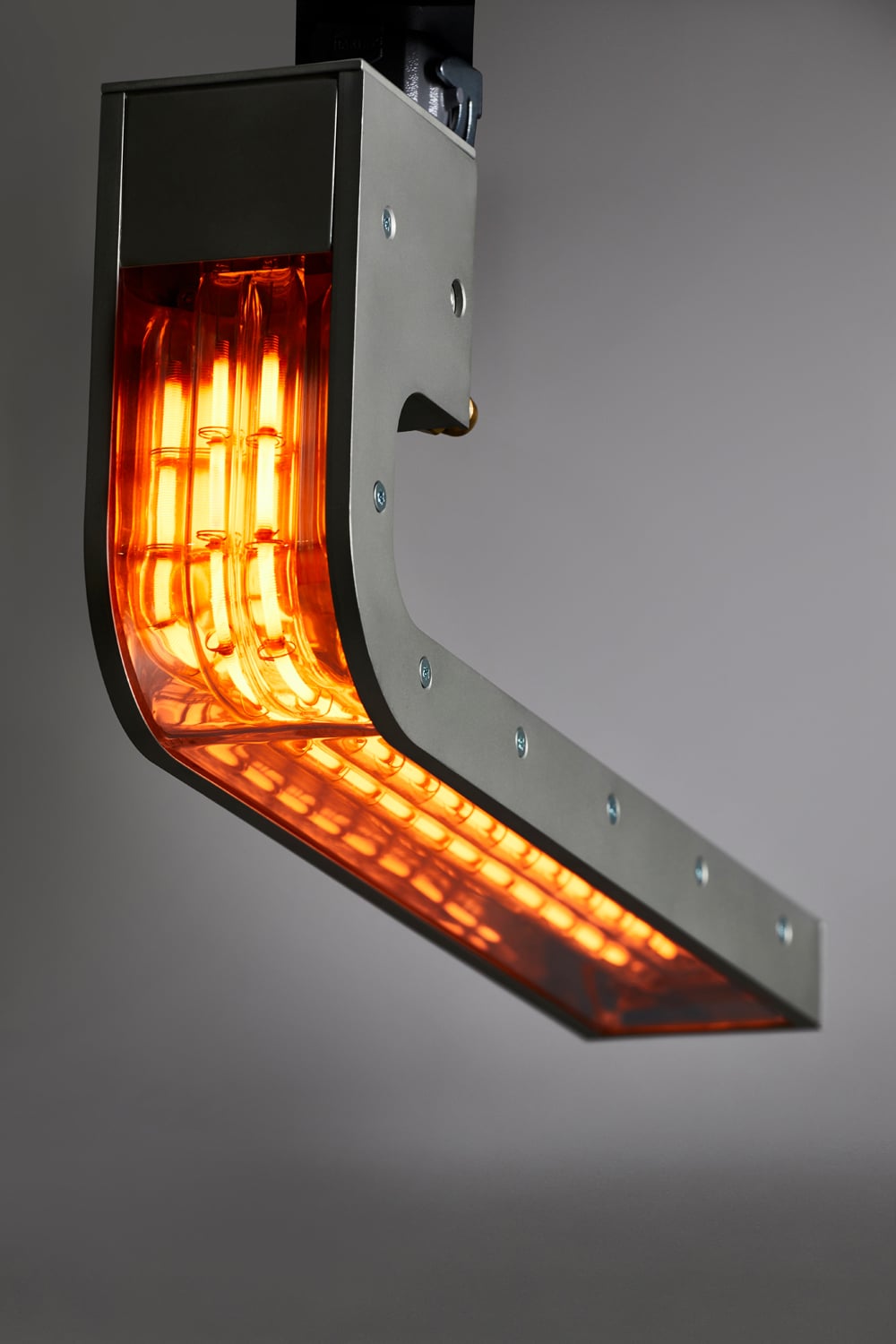 Ushio’s latest brochures and product catalogues can be found on our downloads page. If you are ready to make a formal enquiry, please fill in the form on our contact page.