Controlling a colossal share of the global market in digital cinema projector (DCP) lamps, the likelihood is that you have enjoyed the premium quality of Ushio’s xenon short arc technology without even realising it. Taking on such a huge piece of a market like this also brings a huge amount of responsibility.

For over half a century, Ushio has worked tirelessly alongside the biggest technical names in the industry to ensure the studio’s visions are displayed flawlessly on screen. Ushio Europe B.V. further cemented its influential position within the industry by acquiring Christie, an Academy Award-winning projector manufacturer, in 1992. Christie, now known as Christie Digital Systems, Inc., later emerged as a major player in the DCP market, taking home a second technical achievement Oscar in 1998.

As the digital revolution began to take hold, the Ushio Group took advantage of its own long-standing analogue cinema and large venue expertise by applying it to the new digital age. Click one of the icons below to have a closer look at our DXL, DXL-L, and DXL-LU series lamps, or scroll on down to learn about Ushio’s role in the world of digital cinema projection. 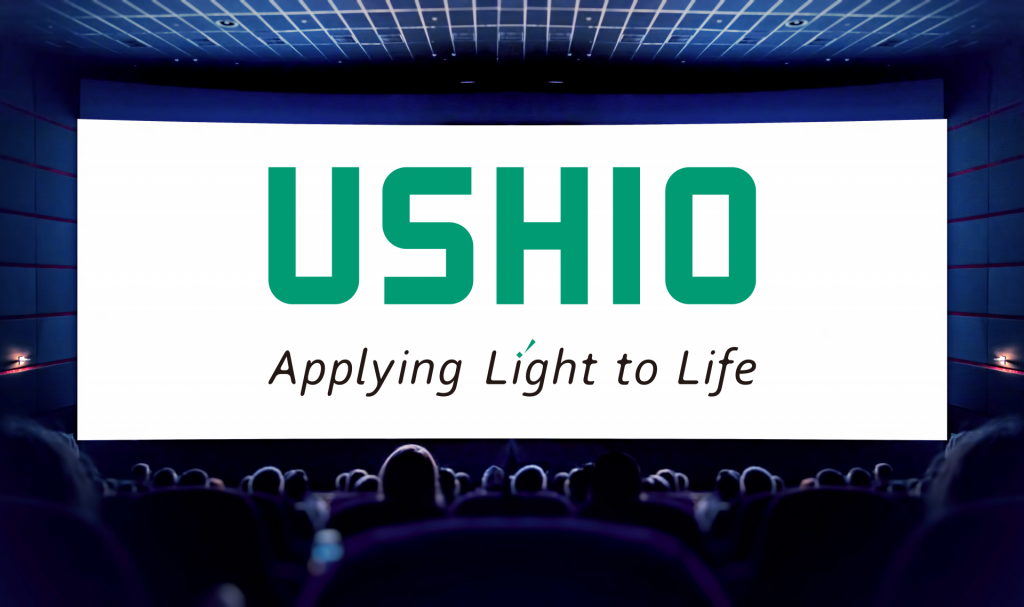 Partnering with cinematic heavyweights to deliver the highest quality

In 2002, Digital Cinema Initiatives (DCI) began as a joint venture between Disney, Paramount, Sony Pictures Entertainment, Universal, and Warner Bros. DCI was established to usher in and define acceptable standards for the new digital era and to ensure a “uniform and high level of technical performance, reliability, and quality control”. Taking this on-board, every Ushio lamp has been designed for and certified by projector manufacturing heavyweights, including the ‘Big Four’ DCI-approved projector makers: Barco, Christie, NEC, and Sony.

With stringent testing and certification carried out by every major projector manufacturer in the industry, Ushio is able to guarantee that you will be using the best quality DCP light sources on the market. DCI has outlined many quality criteria to which cinema equipment must adhere and Ushio’s technology is specifically designed to help meet them. For example, the latest DCI regulations call for a minimum peak white luminance of 14 fL (foot Lamberts), and to achieve that level of brightness from your projection system, choosing the right Ushio lamp is paramount.

These lamps not only offer high brightness for a crisper image, but also feature unrivalled longevity, covered by up to 3,500 warranty hours – equivalent to 2,300 screenings of a regular movie. After all that time, when your lamp finally reaches the end of its long life, Ushio is ready to deliver your replacement. The only question is: will you stay with the same lamp order, or will you allow our experts to make a recommendation that could take your screen to the next level?

Engineering cinema lamps to be cost-effective and reliable

The intensity of all light sources suffers degradation over time, hence the old adage, “the light that burns twice as bright, burns for half as long”. There will always be some kind of trade-off between the brightness of a lamp and its operational lifetime.

As you can see from the graph, the standard DXL series achieves and maintains the highest initial lumen output. The end result is the brightest, clearest possible image on screen; however this also means the lifetime of the lamp is ultimately reduced and requires more frequent lamp replacements.

In order to reduce the frequency and costs associated with the changing of lamps, Ushio worked to develop new solutions which offer an alternative to cinema owners looking to boost their profit margins. By making some adjustments to their original designs, Ushio’s xenon lamp engineers were able to significantly prolong the operational lifetime of the DCP bulbs with the DXL-L and DXL-LU series. The long-life type lamps have a slightly lower initial brightness, but their overall lumen output is sustained for much longer than the DXL series, or the equivalent lamps designed by our industry contemporaries.

The DXL-L series features some seriously durable lamps, some boasting a lifetime double that of the record-breaking DXL lamp. The standard technology was modified to permit a life expectancy increase between 15% and 100%, with some models lasting an incredible 3,500 hours.

Back in 2010, Barco famously relied on Ushio lamp technology to find their way into the Guinness Book of World Records, claiming the title of the brightest lamp-based digital cinema projector in history. As with any official world record, an official adjudicator was sent to the Barco facility in Kuurne, Belgium, to ensure the attempt took place under strict conditions:

The Ushio DXL-70BA 7 kW xenon lamp was chosen by Barco as the perfect candidate to complement its own DP2K-32B projector. That decision would prove to be crucial as Ushio’s lamp shone through Barco’s most efficient optical light path ever, to blast 43,000 lumens on to the screen!

In 2018, Ushio proved yet again that the noble xenon short arc bulb isn’t old news just yet, with the launch of a whole new xenon lamp generation – the LUMINITY (DXL-LU) series. Aside from the impressive range already offered by Ushio, LUMINITY has increased cinema profitability by extending lifetimes without sacrificing brightness.

With impressive extensions to the already generous warranty, Ushio shows its full confidence in LUMINITY. The DXL-30BAF/LU offers a warranty covering 2,200 hours of operation, while the entire LUMINITY series maintains an average of 17% more lumens after 1,500 hours. By the time a lamp has been in operation for 1,500 hours, many other market contenders cease to operate at all.

As the bright new generation of long-lasting xenon lamp, LUMINITY breaks new ground with its high initial brightness that sustains for longer, while promising 100-500 additional operational warranty hours. These developments show that Ushio is committed to supporting the cinema owner, by extending the lifetime of our lamp products without compromising performance.

In short, LUMINITY is a gateway to less lamp replacements, longer lumen maintenance, and a considerable warranty extension that will safeguard lower overheads and maximise profits.

The most common DCP format is Digital Light Processing (DLP), with an 85% share of the global market. DLP imaging was originally developed by Dr. Larry Hornbeck at Texas Instruments, in 1987, and revolves around a series of chipsets which use digital micro-mirror devices (DMDs) to create the projected image. As a result of his groundbreaking contribution, which transformed the way we view cinema, Dr. Hornbeck was presented with a prestigious Academy Award of Merit by Margot Robbie and Miles Teller, at the Academy’s Scientific & Technical Awards held on February 7, 2015.

The following diagram illustrates how DLP cinema projection works, and the role Ushio’s xenon short arc lamps have to play in this innovative system. Below the diagram, expand each component of the system to learn more about that stage of the projection process. 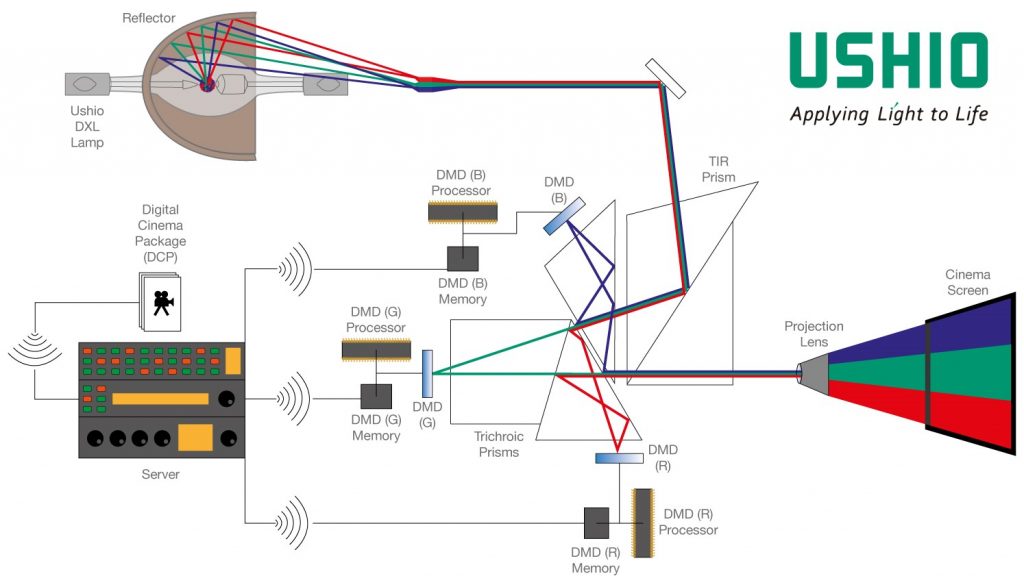 To begin the DLP-DCP process, Ushio’s DXL light sources emit high-intensity visible rays into the projector housing. This must be combined with a reflector, which envelopes the lamp on all but one side, to direct the light through the projection system and maximise efficient usage of the emitted light. A well-placed lens condenses the light into a beam, focusing and directing it towards the TIR prism.

Older projectors used mirrors in order to redirect light around corners, but have since been replaced by prisms in modern professional optics. Mirrors are only able to reflect around 95% of that achieved by a TIR prism. The primary purposes of TIR are to optimise the usage of space within the optical system, divert the light beam onto the DMDs, and improve the contrast of the resulting image.

In a three-chip DLP system, each DMD chip is responsible for processing light in one of the three primary colours – red (R), green (G), and blue (B). In order for this to be possible, the light emitted from the Ushio DXL lamp must be split through the use of a trichroic prism. This is achieved by creating an assembly from two dichroic prisms, which are able to split light into two colours, and positioning them with an air gap between the prism surfaces. The result is certain areas of the trichroic prism now act as dichroic filters, each blocking two of the three colours but allowing one to pass through. The DXL’s output is separated into three distinct red, green, and blue colour beams.

If Ushio’s xenon lamp represents the heart of the projection system, then the DMDs are the brain. Sometimes referred to as the DLP chip, a DMD is a semiconductor-based microelectromechanical system (MEMS) device which incorporates an array of mirrors, a memory chip, and a light dump. As the DXL’s light beam has now been separated by the trichroic prism, three DMDs are required, and each is dedicated to receiving only one of the RGB colours.

Each mirror on the DMD surface represents a single pixel, reflecting light in order to produce the final image. To achieve a truly 4K image, the DMD chip would need to house around 8.3 million mirrors. As you can imagine, these mirrors are incredibly small, measuring less than 1/5 of a human hair. The chip is able to individually tilt the mirrors into their ON / OFF positions using a binary system (0 or 1). When a mirror is in the ON position, light from the Ushio DXL lamp is reflected toward the projector lens, which makes that particular pixel appear bright in colour on the screen. When positioned in the OFF state, the light is reflected away from the lens onto a heat sink; or light dump, as our partners at Barco like to refer to it. That pixel will now appear dark in colour when projected onto the screen.

The three reflected beams now carry all of the information required to create an image on the screen. All that remains to do is recombine the red, green, and blue beams into a single light stream once again. This is achieved by directing the rays back through the trichroic prism and into the projection lens. As mentioned before, the image is tiny, so the lens must be capable of blowing up the image up to 1,200 times. Once this is achieved, the screen is illuminated in stunningly high-definition for captivated audiences to enjoy!

Ushio is ready to deliver DCP lamps to your cinema

Ushio Europe is a longstanding ally of the worldwide cinema industry, and a pioneer in the manufacture of top quality xenon digital cinema projector lamps. With a huge selection of lamps built to the highest specifications, Ushio is able to furnish every one of your screens with the vivid and clear images which your audience expects. We place no significance on whether our customers require a low power lamp for a single screen art-house, or a selection of setups for an entire theatre chain of 25 screen multiplexes. 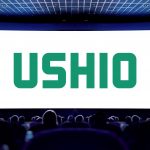