As cinemas across Europe cautiously welcome visitors again, it may come of little surprise to you that the official convention of the International Union of Cinemas (UNIC) will take place on screen. This was not always the intention as the annual CineEurope gathering tends to take place in the scorching Catalonian summer of Barcelona, Spain.

As the Coronavirus pandemic ushered in mandatory quarantines across the continent, The Film Expo Group was forced to announce a postponement before cancelling the event entirely. With the motion picture industry in disarray and in dire need of a boost, UNIC made an important decision – the show must go on. CineEurope will be resurrected as a two-day online conference and trade show on June 17th and 18th 2020.

Representing 42,000 screens across 38 European countries, the CineEurope conference and trade show is considered to be a vital stop on the movie circuit as it brings together the cream of the industry each year. Cinema chiefs, studio executives, key industry suppliers, and Hollywood A-listers descend on the Centre Convencions Internacional Barcelona (CCIB) each year for exclusive screenings, product unveilings, and an abundance of networking opportunities.

A look back at CineEurope 2019

The 2019 edition was a great success, not least for Ushio and our beach bar booth which hosted the launch of our LUMINITY series of xenon digital projector lamps. Introduced to our digital cinema projector (DCP) lamp collection at the end of 2018, the LUMINITY DXL/LU series has extended the lifespan of high wattage xenon short arc lamps by an unprecedented degree. Offering a higher brightness long after competing lamps would begin to fail entirely, the LUMINITY series improves operational profitability without sacrificing the established quality of USHIO’s xenon cinema solutions.

What to expect as CineEurope 2020 heads online?

Many of the insights gleaned each year reveal a sneak peek into what lies in store for the next cinematic season and 2020’s improvised format promises to be no different. With a programme of six hours spread over two afternoons, around 1,000 industry professionals are poised to tune in to a mixture of ceremonies, executive roundtables, presentations, seminars, and much more.

The overriding topic of debate will undoubtedly be the ongoing global pandemic, its global economic impact, and the tremendous preparations required to adhere to new distancing guidelines while preserving the magic of cinema. Aside from that, many representatives of major Hollywood and European studios are cued up to deliver messages of solidarity and unity as the rebuilding process gets underway.

Key industry figures representing The Walt Disney Company, Warner Bros., Universal, StudioCanal, and Paramount are amongst the contributors who will each take a two hour slot as the virtual trade show floor allows visitors to cherry-pick from the packed schedule. Operating in much the same way as the live events of previous years, each visitor will be able to engage with colleagues and potential partners. This includes the opportunity to ‘visit’ many of the companies who were originally slated to attend in Barcelona.

One highlight is sure to be the executive roundtable chaired by Julien Marcel, CEO of The Boxoffice Company, titled ‘The Future of the Global Cinema Sector – Preparing for the “New Normal”’. Mr. Marcel will lead the conversation which brings cinema chain bosses and studio heads together, as they lead the industry in preparation for the drastic changes ahead. Following a similar theme, another session we will be looking forward to is the appearance of the Celluloid Junkie himself, Patrick Von Sychowski, as he discusses ‘Post Pandemic Technologies – How To Keep Moviegoers (And Staff) Safe’.

There is no doubt that the events of the COVID-19 pandemic will change the cinema industry forever; the way we gather together will be structured and regulated, while trade shows will need to follow strict guidelines in order to take place. As glimpses of the old world peek out now and then, it is important to remember how well the community has stuck together during the uncertainty and economic instability of the past few months. As a loyal partner and contemporary to those within the cinema industry, Ushio Europe would like to wish everyone involved good health, a quick return to business, and our best wishes for the future. We hope you enjoy CineEurope 2020 as much as we will, and we will be sure to see you face-to-face at the 2021 event! 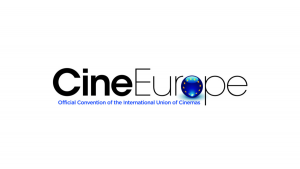