USHIO OPTO SEMICONDUCTORS, INC. (Head Office: Tokyo, Managing Executive Officer: Hiroaki Banno), a wholly-owned subsidiary of USHIO INC., has recently developed a broadband LED that produces the world’s maximum output※ of 160 mW over a wide bandwidth between 400 and 1000 nm, which covers the range from visible light to near-infrared light. From the 1st of December, USHIO OPTO SEMICONDUCTORS, INC. started shipping samples from its new “Spectro Series” lineup as part of the “epitex series” LED brand and will exhibit Photonics West 2019（The Moscone Center US San Francisco） which will held on February from 5th to 7th.

Because the absorption characteristics of near-infrared light differ from one substance to another, they are widely used in the fields of foodstuffs, medicine, and so on, as a method of determining the kind and amount of a substance, such as sugar content or blood oxygen saturation level. In recent years, there have arisen demands for smaller measuring devices, such as foodstuff sensors that are portable.

In addition, the light from the light source, which extends from the visible region to the near-infrared region where the wavelength is about 1000 nm, roughly matches the spectral sensitivity of the silicon photodetector which typically employs a CMOS device. It is therefore hoped that by combining the light source with a photodetector, it can also be used as a sorting unit that sorts materials, colors, and other properties of PET bottles, for example.

However, in the case of existing light sources, miniaturization and maintainability are issues for the following reasons

In the case of conventional near-infrared LEDs, monochromatic light can be received from one device, and in order to measure different materials using a single device, it is necessary to install multiple devices, which makes miniaturization difficult to realize.
LEDs covering a wide range of wavelengths, including near-infrared, which are being used in recent years, produce a weak output. Consequently, adequate light output cannot be obtained, making measurement difficult to perform.
Halogen lamps that produce high output and emit light over a wide range of wavelengths are a large light source, which also cause various other parts in the vicinity of the lamp to be heated by the light. For this reason, it is necessary to install a heat dissipating jig, which makes miniaturization difficult to achieve. Also, compared to an LED, halogen lamps have a short life, and must be replaced frequently.

In contrast to the above, USHIO OPTO SEMICONDUCTORS, INC’s strength lies in the development and manufacture of LEDs, particularly in the infrared area where much work has been carried out by our predecessor organization. By making optimum utilization of our technology and know-how, we have been able to realize an LED that has an output of 160 mW, the highest in the world. This type of LED uses a fluorescent material that features a continuous spectrum extending from visible light to near-infrared light.

It is hoped that this work will bring about the development of a device that enables an individual to measure the sugar content or fat content of foodstuffs, for example, and also increase the efficiency of sorting units that can sort the raw materials, colors and foreign matter in agricultural produce and plastic products.

“Spectro Series” products will be available in multiple forms, from various packages to “Chip on Board,” at the request (output, light distribution, and size of the light source) of the customer. 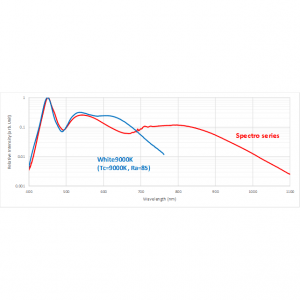