The external application of high-energy electrons into a sealed glass chamber generates an intense plasma discharge, also known as dielectric barrier discharge. The generated plasma contains high-energy electrons, and can be immediately extinguished. The plasma induces the atomic excitement of the noble gas inside the lamp which leads to the formation of excited dimers.

The final VUV emission stage of the reaction is completed when the excimer molecules dissociate and return to their original ground state within a matter of nanoseconds, resulting in the emission of the excimer-specific spectrum.

These VUV light particles travel through the air, partly absorbed by oxygen to create ozone on the substrate, where they crack the molecular bonds of the surface.

The cracked molecules are partly removed, creating a chemically medicated top layer of the substrate. This effect is distributed along the length of the lamp, which can emit VUV light at a wavelength of your choice from 172 nm to 310 nm, and can be customised and adapted to your needs during manufacture by USHIO.

The most commonly used excimer wavelength is 172 nm which has energy of 7.23eV and is powerful enough to directly crack all major bonds of organic molecules, with the exception of bonds between carbon and oxygen (C=O) and some inorganic oxides.

By definition, the term excimer refers only to homodimeric bonds between molecules of the same species. For excited complexes formed of heterodimeric (two different) structural species, the official term for the resulting molecule is exciplex, however the term excimer is generally used to describe these bonds too.

From components to full in-line solutions, Ushio Europe is ready to supply excimer technology for all industrial and laboratory applications
DOWNLOAD THE BROCHURE NOW
Download

USHIO’s PureRelease is the gold standard of UV disinfection in the water dispenser manufacturing industry, instantly providing clean water. Installed as part of an office water cooler, or as an under-the-sink solution at home, PureRelease is the go-to, chemical-free, answer to your safe water needs.
DOWNLOAD THE BROCHURE NOW
Download

Excimer irradiation provides a double benefit as it cleans and the substrate surface in one process:

Excimer irradiation ‘activates’ the surface by increasing the surface energy, which is measured in millinewtons per metre (mN/m). Surface energy determines the contact angle between a fluid and a solid surface. To ensure adhesion and homogenous distribution, in applications such as printing and gluing, a smaller contact angle must be achieved. 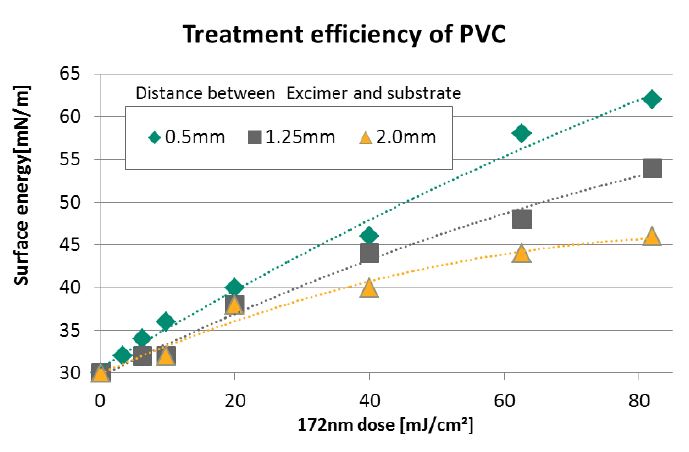 While the surface irradiation of polymers and other composite materials may be the most popular usage for excimer, the treatment is also applicable to almost any surface. Cleaning, coating, and bonding can also be significantly improved when applying excimer technology to silicon wafers, metals, and glass. In some cases, total hydrophilisation can be achieved in which wetting of the entire surface occurs. At this point, the contact angle of the liquid reaches zero degrees, transforming the drop of liquid into a liquid film.

An alternative to Corona and Plasma treatment

In fact, the IR emissions from excimer are almost non-existent, as is the presence of any thermal stress to the substrate. This reduced thermal load means no damage to the surface structure, which in turn assures better bonding results.

Instead, USHIO excimer lamps utilise VUV light to treat the surface, so there is no discharge reaction or damage to your substrates, nor is a significant heat load applied to the surface. Ultimately, this lower heat load makes excimer an ideal solution for temperature sensitive substrates, such as foils.

“Excimer: A contraction of ‘excited dimers’ which describes the behaviour of molecules on a substrate surface when exposed to VUV light”

The photons emitted from an excimer lamp maintain a relatively low energy compared to the accelerated particles in other treatment methods, which makes a noticeable difference on the surface itself. This ‘softer’ approach means the substrate surface does not become rough like it does with corona and plasma.

Viewing a discharge-treated surface under an electron microscope will reveal a moon like surface with large scattered holes, as a result of molecular bombardment. When viewing the same material type after excimer treatment, the surface remains smooth, and benefits from a higher level of homogeneity.

Thanks to the absence of an electrical field, excimer does not suffer from dust contamination like the aforementioned alternatives, and can be applied to all electronics, which would otherwise suffer from static related issues associated with a discharge.

These desirable properties are supplemented by some welcome technical specifications: 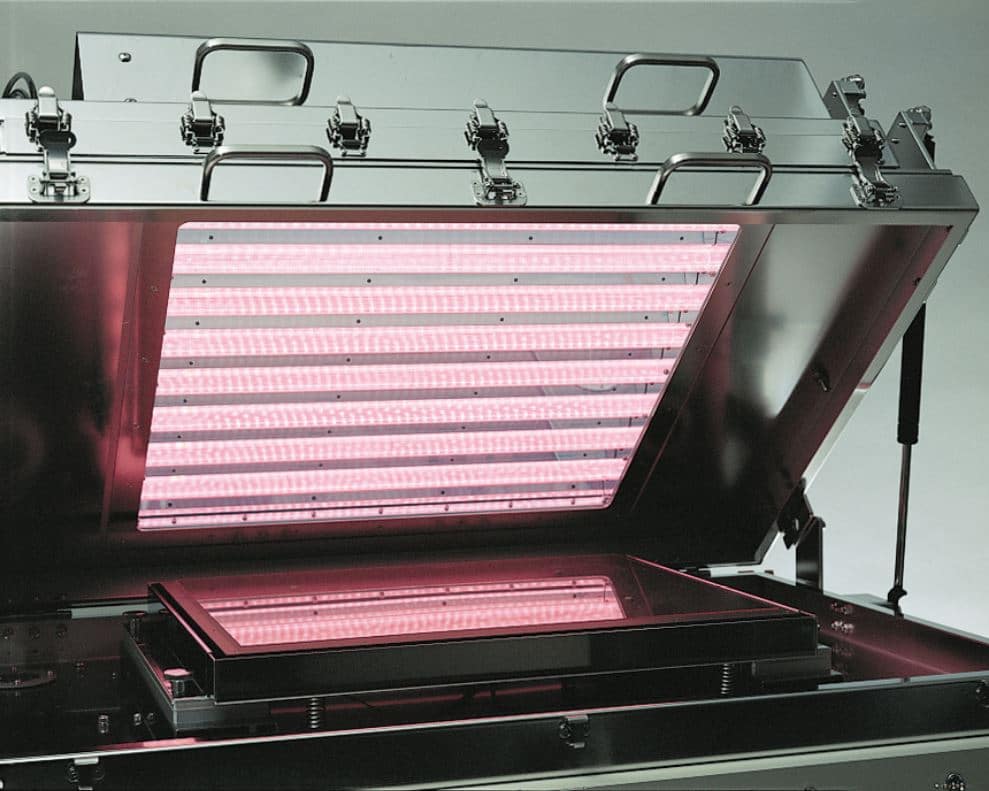 You may not realise it, but excimer is not a new technology. USHIO has been perfecting and discovering more applications for over a quarter of a century now, and the astonishing potential of excimer shows no sign of slowing. This has culminated in the release of its coveted ExciJet series, which downsizes the technology to easily portable solutions: 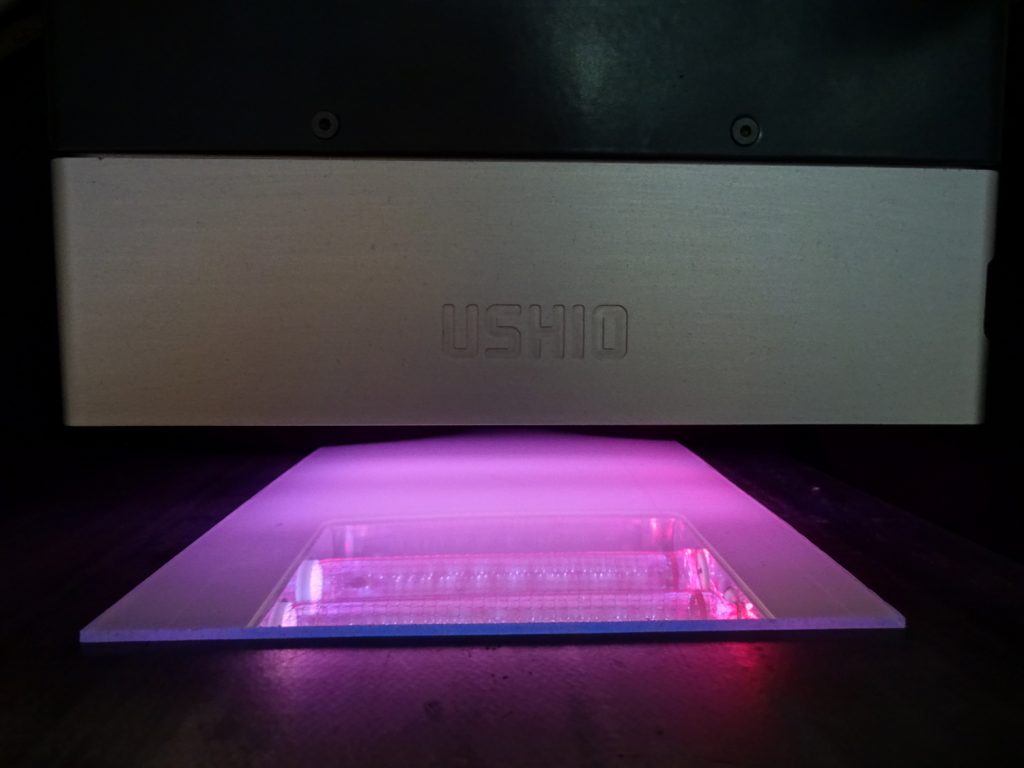 In general, ultraviolet light has the deserved reputation of being dangerous for humans; however this only takes place at wavelengths of 354nm and above. At 354nm, UV light gains enough intensity that it is able to penetrate the epidermal layer of skin and cause molecular changes in the layers beneath.

The excimer irradiation solutions from USHIO occupy customisable wavelengths between 170 nm and 310 nm, which are chosen for the specific qualities achieved at each individual wavelength.

At this range of intensity, the UV radiation is unable to penetrate the top layer of skin and simply deactivates any bacteria that may be present on the surface. Our surface activation technology has been developed to concentrate 172 nm light on your chosen substrates.

On the other hand, our PureRelease water purification component has proven 242 nm light to be most effective in the instant disinfection of water at the point of dispensation (POD). USHIO is also working on an irradiation device that will operate at 222 nm, and in the future, will be utilised in pioneering medical procedures to promote faster wound healing.

Experience VUV irradiation for yourself at USHIO’s Excimer Innovation Laboratory

USHIO has seen a huge increase in enquiries about its excimer solutions, culminating in regular and popular appearances at trade shows such as Composites Europe, InPrint, K 2019, and LOPEC.

The biggest printed electronics conference and exhibition in the world takes place annually, in Munich. In-house excimer specialists, Mr. Esmat Jawad and Dr. Jörg Söllner, were on hand with a live demonstration kit.

Visitors to the booth were treated to exhibitions of excimer surface activation, as various substrates were treated with an ExciJet 172nm modular lamp, which then revealed the irradiated USHIO logo when sprayed with water.

The live demonstration is typical of the applications tested at the USHIO Excimer Innovation Laboratory, and serves as an illustration of the simple set of processes USHIO follow to ensure optimal standards for your bespoke implementation.

USHIO’s excimer light technology allows the bonding of precision parts, such as optical & medical equipment, without adhesives or chemicals. By pressing two substrates together during treatment, a high strength and permanent bond takes place at a low pressure & temperature, with a faster annealing time.

The excimer technology developed by USHIO has already earned an excellent track record in the following industrial processes:

Bespoke excimer lamp and housing systems can be designed on request, unlocking the immense application possibility for various materials and surfaces. With an in-built power supply and completely flexible specifications, the excimer lamp & module solutions can easily adjust to your needs. Not only can USHIO help you find the right product for your needs, we share years of research to help make recommendations for process and execution. 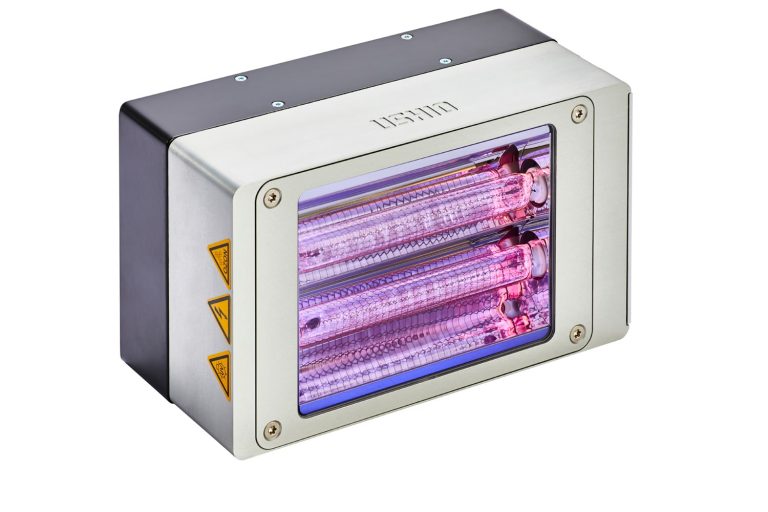 USHIO’s excimer lamp and modular solutions are the result of 30 years invested in research & development, and still, new application advances are being made constantly. A recent motivation of the research team has been to enable printing of 3D electronics directly onto a pre-treated surface.

This advancement looks set to bring significant implications for products which are heavily reliant on weight reduction, such as those in the automotive and aviation industries. Of additional interest to these two important industries, excimer is able to facilitate the adhesive-free bonding together of certain materials.

It is even possible to bond certain polymers to quartz glass! The chart below illustrates examples of glass, mineral, and polymer types that can be bonded using excimer technology. 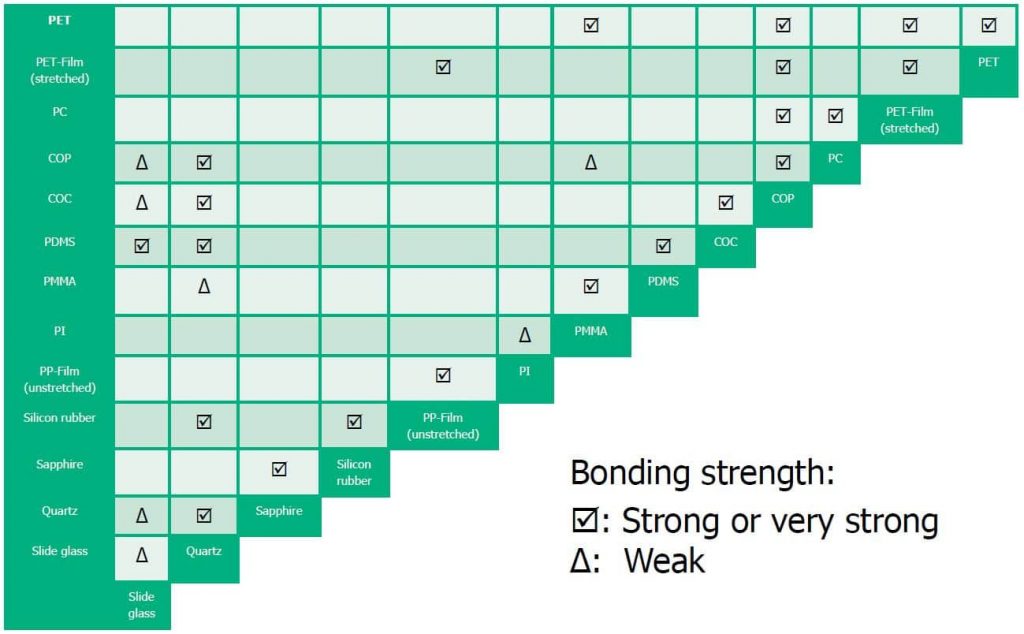 Overall, it really depends on what your process requires. At USHIO, we are more than capable of giving informed advice to our clients, which is why they come back to us every time.

The benefits of excimer are clear, surface activation is useful for all kinds of applications but often choosing the wrong method can lead to expensive complications later.

Excimer is unique in that it allows irradiation without allowing an electrical discharge to make direct contact with the substrate surface. This means that the treated surface will hold on to ink, adhesive, or lacquer for longer.

USHIO is able to ensure that its highly qualified development and production teams are at your disposal for an in-depth problem study, thorough research analysis, and extensive testing. You will receive immaculate implementation after your go-ahead, putting USHIO’s customer-driven focus to the forefront of your business.

Where quality prevails, USHIO excels. Which brings us to the meticulous after-service provided by the team to secure a 100% satisfaction guarantee, and ensures the design & solution are delivered to your exact requirements.

Are you still not convinced? We already have some huge references from USHIO clients and partners regarding excimer technology, and we are happy to share them with you. Click the icons below each testimonial to learn more about USHIO’s excimer successes.

“Sterilising medical instruments is of the utmost importance – every upgrade could save another life. To ensure consistent quality and do one better every time, we turn to reliable partners. Like USHIO. Our medical disinfection devices with sterilisation rely on excimer technology for accuracy. The USHIO team provided us with multiple design proposals, which helped us make an informed decision on the best lamp selection to continuously move forward.” 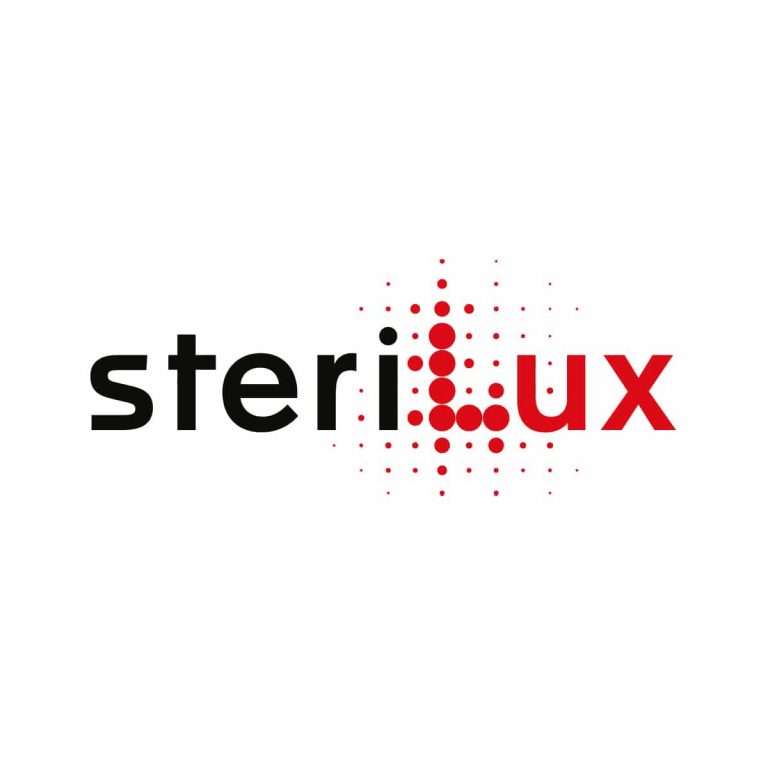 Mr. Lucas Meyer Chief Technology Officer at SteriLux SA
“We could not have achieved these results without the USHIO excimer technology. It was the missing compact piece to our puzzle. The USHIO team has been dedicated to this project from start to finish, their expertise and service has only intensified the outstanding results the excimer technology generated for the project. Excimer fixed our surface adhesion to achieve outstanding flexibility and transparency the PhotonFlex project required. USHIO made it happen in the best possible time, size and way.” 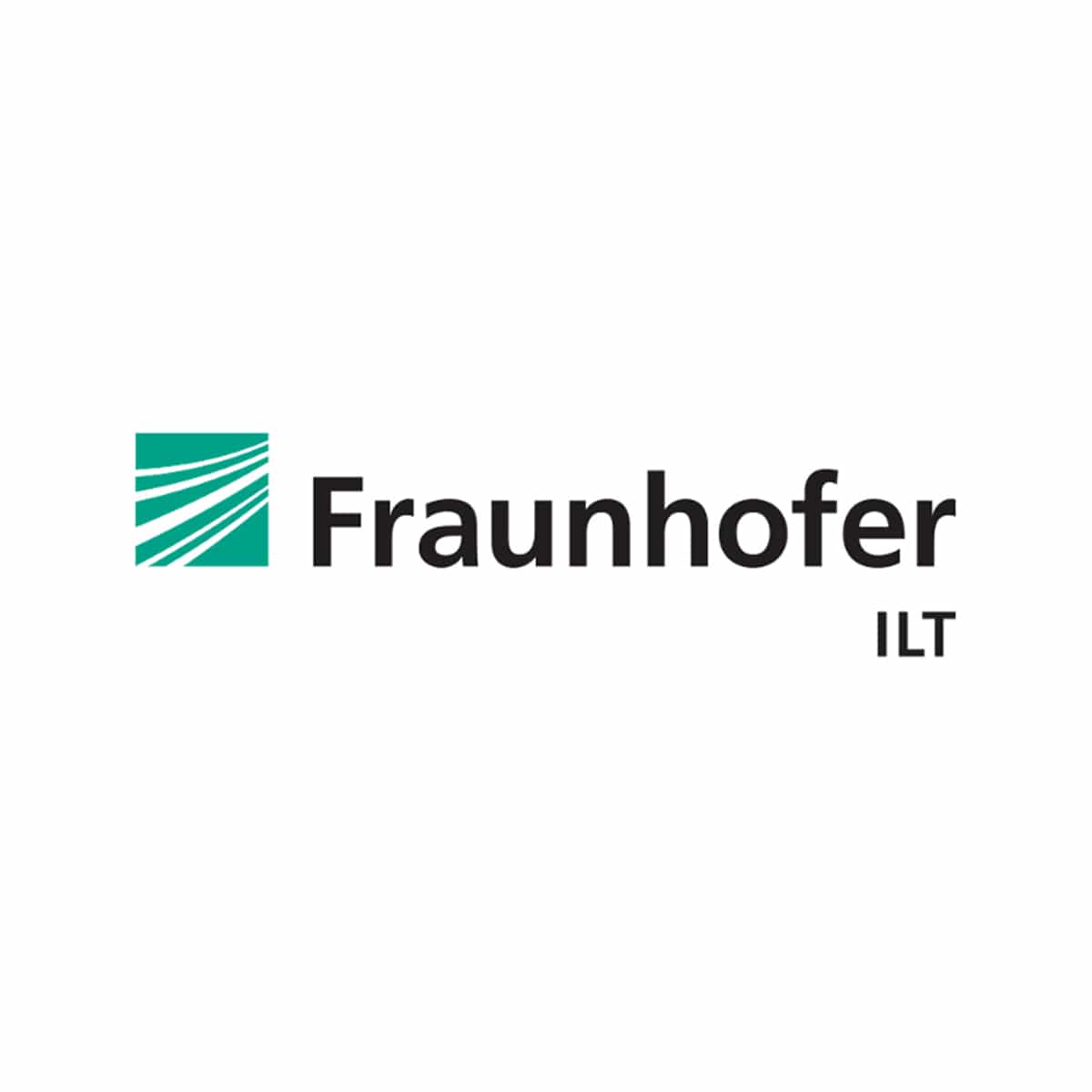 From components to full in-line solutions, Ushio Europe is ready to supply excimer technology for all industrial and laboratory applications
DOWNLOAD THE BROCHURE NOW
Download

USHIO’s PureRelease is the gold standard of UV disinfection in the water dispenser manufacturing industry, instantly providing clean water. Installed as part of an office water cooler, or as an under-the-sink solution at home, PureRelease is the go-to, chemical-free, answer to your safe water needs.
DOWNLOAD THE BROCHURE NOW
Download
Ready to know more?
Contact USHIO today!

Catch the USHIO Excimer Demonstrator at a trade fair near you

You can follow our latest excimer event updates on LinkedIn or our News page, with many insights shared with you in the run up and throughout the event itself. 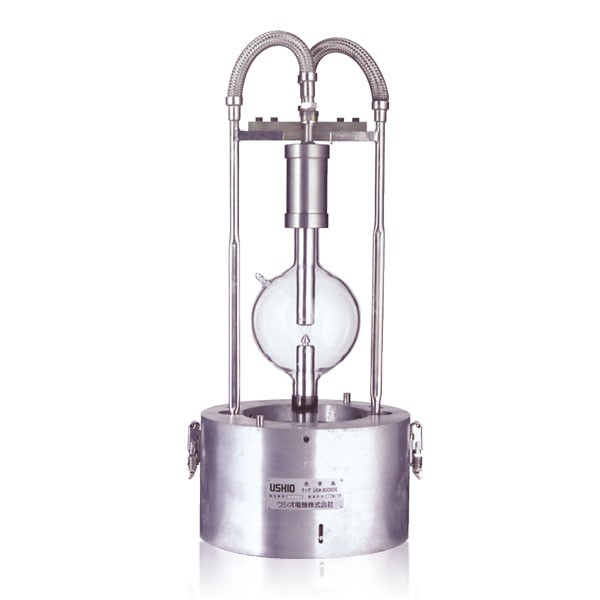