An ANPR system is essentially a camera which is linked to a computer database. The high-definition infrared camera is tasked with capturing a clear image of a vehicle’s registration plate. Rather than relying on visible light or having to adjust the light source for day or night, NIR LEDs always provide sufficient illumination for the camera to do its job. The image is then analysed by computer software called Optical Character Recognition (OCR). The OCR program converts the image into machine-encoded text. The text is then fed into the database to see if it comes up with a ‘hit’. A ‘hit’ is a match between the captured data and an existing entry in the database. What happens after a ‘hit’ has been identified depends entirely on the application.

Possible actions triggered by a positive match could be the opening of a gate for a delivery truck to enter a secure postal depot; an alert could be sent to nearby authorities if the owner of the ‘hit’ vehicle has been banned from driving; or a car park exit barrier could be opened if the database confirms that the vehicle’s parking fee has been paid. Increasingly, the technology is beginning to move away from the traditional applications mentioned above and integrated into smart city transport systems. This paves the way for improved speed and journey time analysis, as well as detailed environmental studies.

Why is ANPR better for your business?

Where do Ushio’s Epitex NIR LEDs fit into the ANPR system?

The NIR LED portion of the electromagnetic spectrum includes wavelengths of 700-1,000 nanometres (nm). This is the closest region of infrared radiation to visible light and begins just beyond the limit of detection by the human eye. Ushio’s NIR LEDs are used to briefly illuminate the subject for a high-definition infrared camera, much in the same way the ‘flash’ works in a conventional camera.

As the ANPR system must act quickly and efficiently to capture an image of a moving object, such as a car travelling at 100 km/h, an LED set to pulse mode illuminates the target vehicle by emitting strobe-like bursts of light. In the case of road camera systems, a pulsed, narrow wavelength LED combined with a short exposure time produces the required clarity for the OCR software to process the image. LEDs which are in pulse mode achieve greater illumination by allowing the operator to deliver a higher current to the LED. The ability to regulate the forward current allows the operator to have accurate control of the pulse duration time, thereby producing the ideal power and duration of illumination for their specific model of infrared camera.

The resulting infrared image allows the computer to use its OCR software to advance the process from the recognition stage to the database cross-referencing stage. At the moment of capture, a ‘normal’ visible light camera image is also taken. This is for any instance where a photograph is required to demonstrate the vehicle identity to a human, rather than a machine.

Lower power NIR emitters, such as moulded type LEDs, are ideal for smaller devices; however, the general rule of infrared imaging is that high-power LEDs achieve a clearer image from greater distances. The clarity of the image is also affected by the optical lens chosen to accompany the chip. Depending on how the light is focused by the lens, you can achieve a more intense image or choose to illuminate a wider area. 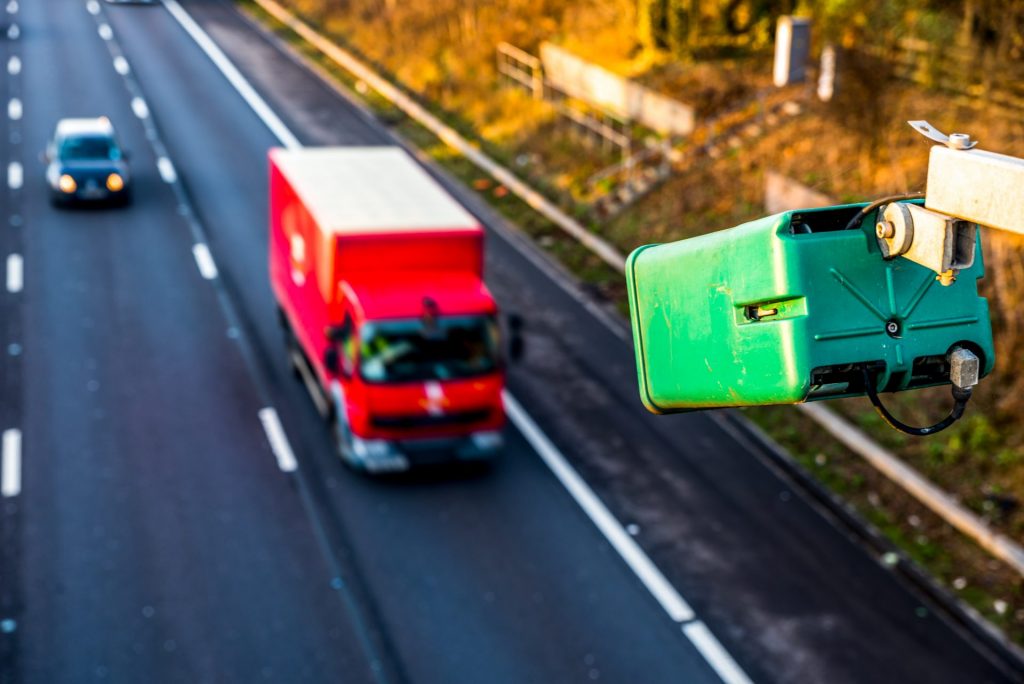 Which Ushio LEDs are used in ANPR applications?

The top four Epitex LED types that Ushio recommends as the crucial NIR component come from the Moulded, EDC, EDCF, and SMBB (standard, D, and DS) families. The most requested NIR wavelength for ANPR applications is 850 nm, although 940 nm is also very popular. The SMBB-DS series boasts the most powerful IR LEDs currently on the market. Ushio is happy to work with clients to find out which LED would suit your device. With such a wide range of options, it is also possible for us to put together a design specifically for you: 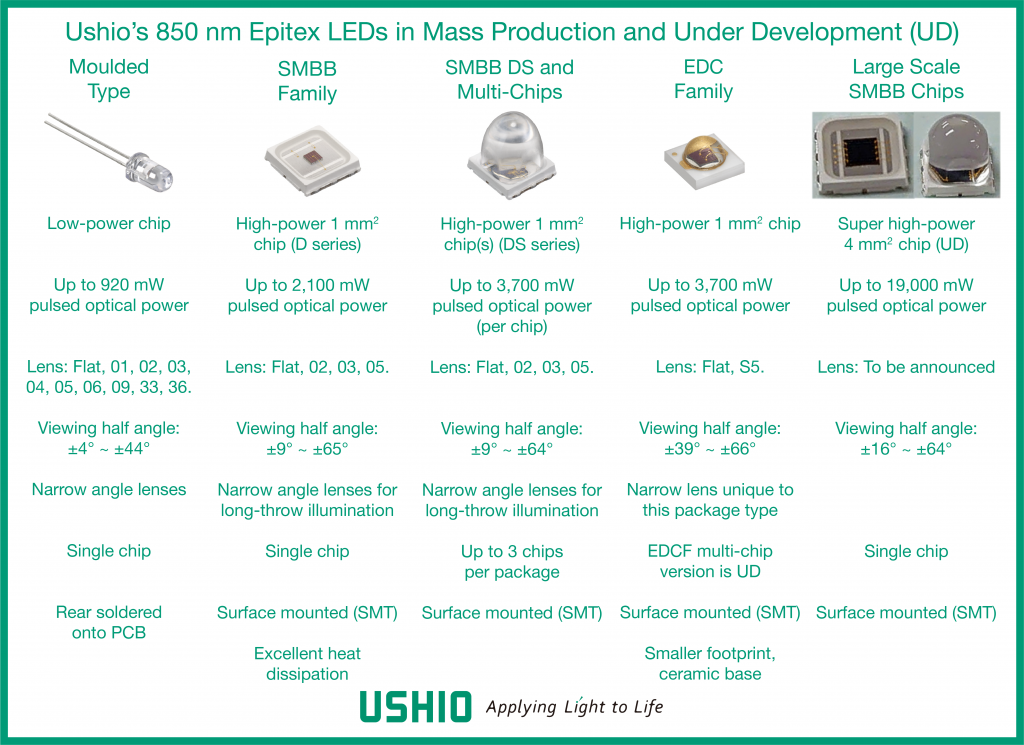 More is better: High-power LEDs give you quality and quantity

Having established the preferred NIR wavelength for ANPR/ETC applications, the next step is to choose the ideal power and spectral width. The required specification can vary significantly based on a number of factors including the intended environment, distance from the target, the desired lateral width, and how detailed the final image needs to be. All LED package types come with a variety of different options, perhaps too many to list in one article, so we will concentrate on our ANPR clients’ favourite LED series.

As the flagship Epitex LED ‘family’, the SMBB family is the most versatile set of LEDs on the market. With a copper heatsink-equipped 5 mm x 5 mm package, these record-breaking LEDs are available in single or multi-chip form. This means operators have a single 1 mm x 1 mm high-powered chip at their disposal; or if your ANPR device requires even more power, the multi-chip SMBB package can be mounted with up to three chips for triple the output.

Our most popular ANPR LEDs hail from the SMBB-850 series. With the standard power, high-power D-series, and the super high-power DS-series variants, Ushio is able to provide you with all the technical know-how in order to pick out your best option. 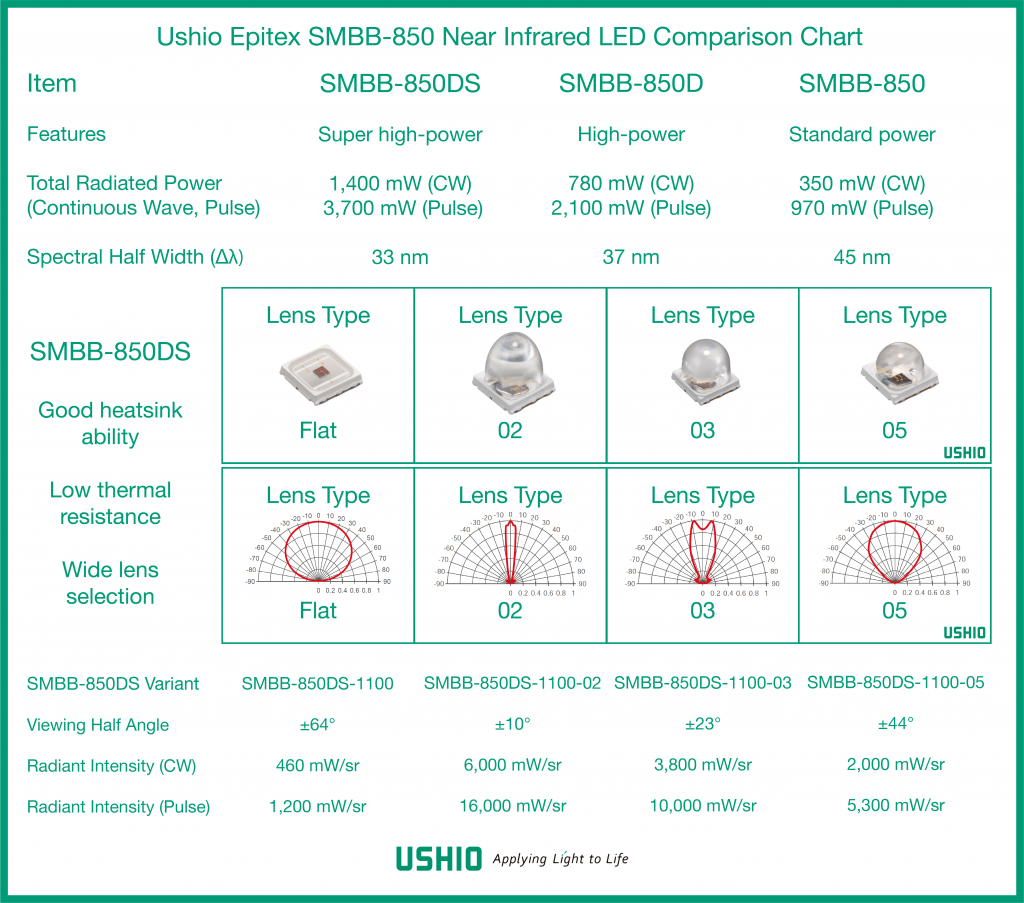 The SMBB850DS series has a total pulsed output power of 3,700 mW, while the intensity of the emitted radiation remains dependant on the chosen lens. The flat and 05 lens types allow the radiation output to be emitted from the SMBB package at a broader angle, thereby achieving a less-focused, lower radiant intensity. In the case of the SMBB850DS-1100, the flat and 05 lens types provide 1,200 mW/sr (milli-Watts per steradian) and 5,300 mW/sr, respectively. For applications requiring a highly-focused, high-intensity output, the 02 and 03 lens types tighten the radiant beam and focus the output power at a narrower, intensified angle. The 02 lens type, in particular, provides a very high intensity as the light is crammed into an angle of ±10° to intensify the radiance up to 16,000 mW/sr.

Another factor worth taking into account is the distance at which the ANPR camera will be located from the target. Choosing a narrow beam lens, such as the 02 lens type, enables the intensified light to travel a greater distance. The intensity of the light diminishes the further the light travels, and the area of illumination also expands in a cone-like form. Choosing a higher power LED will do a lot to reduce the effect of distance by sending a larger number of photons in the first place. Ushio can assist you in choosing the most efficient LED for your ANPR system once you have chosen your preferred distance and illumination diameter. Below, are some examples of how different power outputs can affect the results you receive from the same 02 lens. Additionally, the final example in the table shows how our LEDs are also built to be compatible with the external lens of your choice. 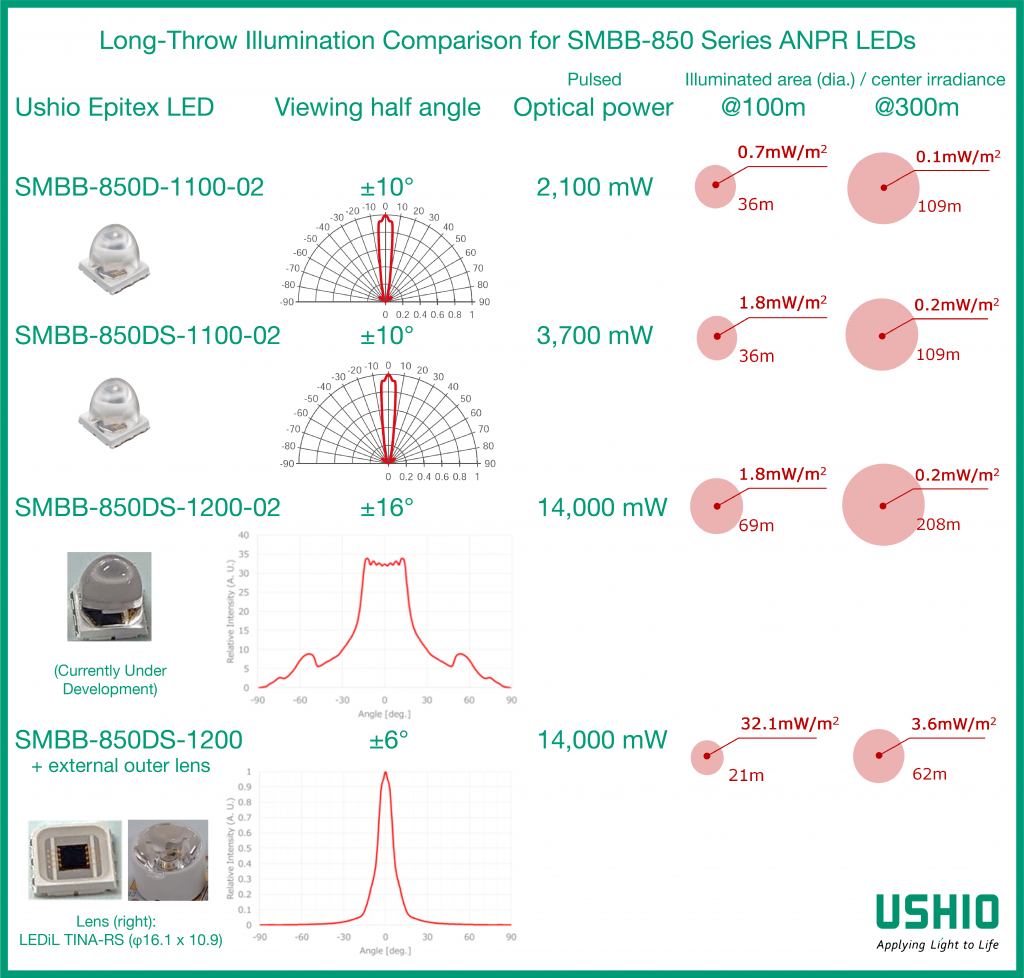 EDC: the perfect solution when you are short on space

While the SMBB family remains ever popular, sometimes Ushio’s clients are looking for a single-chip package with a smaller footprint. Of course, Ushio would not want to compromise the high-power offerings from the SMBB class, so the EDC family was developed. Offering the same wavelength range as the SMBB packages, EDC LEDs bring the true benefits of miniaturisation by taking up a space of just 3.5 mm x 3.5 mm.

An EDC package features a ceramic base, which serves as an ideal heatsink, and provides excellent isolation from the circuit. The EDC family is mounted with a single 1 mm x 1 mm chip to remain capable within the same applications as single-chip SMBBs. The key difference, however, comes in the form of the smaller footprint, which allows extra room for more LED packages or the addition of other components in need of more space.

The EDC family can be customised with one of two lens types, flat and S5. As expected, the flat lens type has a wide ±66° angle. This angle ensures a wide spread of pulsing light radiating from an LED, such as the EDC850DS-1100, yet still manages an intense 1,200 mW/sr from a total radiated power of 3,700 mW.

The S5 type lens is unique to the EDC family and has a narrower angle of ±39°. When integrated into the EDC850DS-1100-05 package, the S5 lens concentrates the light into a narrower beam, increasing the pulsed radiant intensity to 5,500 mW/sr. The EDC and EDCF packages will bring that same powerful infrared illumination as the SMBB family, but saving those millimetres of space can pave the way to lower production costs and a smaller, sleeker ANPR device. 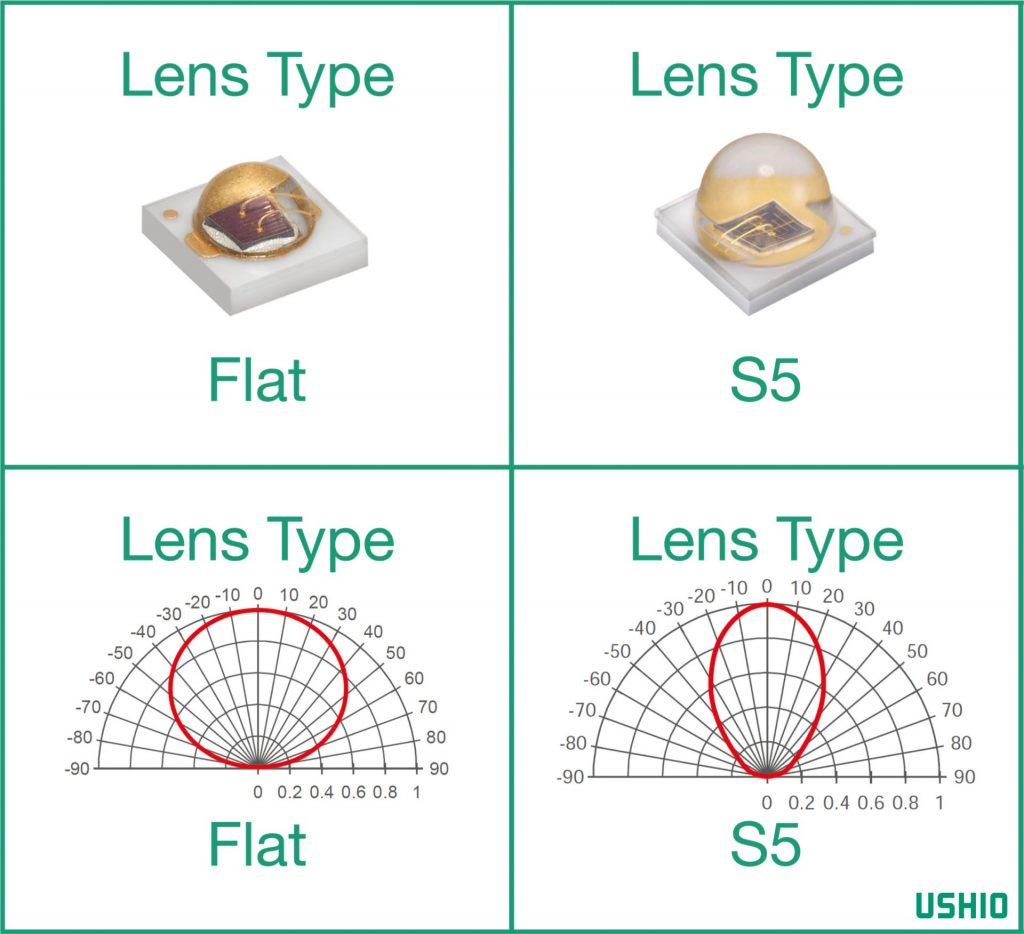 The tip of the solid state iceberg

Ushio’s all-encompassing expertise in the field brings various opportunities to customise chip and packaging technologies such as the chip design, epitaxial growth, device process, optical design, thermal management, and electrical & mechanical design. Beyond solid state lighting, Ushio has over half a century of experience in the manufacture and customisation of device and optical technologies. With this unrivalled knowledge and the willingness to sit down with customers to find the most suitable, bespoke solution to their needs, Ushio has been established as the trusted partner of companies and clients across the globe.

Contact Ushio for help with all LED and laser diode applications

To begin your EMEA sales enquiries regarding Epitex ANPR LEDs, Ushio Europe’s SSL Sales Director, Ardan Fuessmann, can be reached via our contact page. If you would like to be well-informed on our LED collection before approaching Ushio directly, you can access the datasheets for all Ushio Epitex LEDs by visiting ushio.eu/product-category/products/led. When you are ready, Mr. Fuessmann will be readily available to discuss all of your solid state lighting needs and is more than happy to guide you through our entire LED and laser diode portfolio. 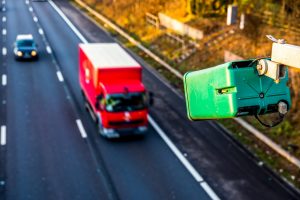