In tradition with a partnership stretching back over a quarter of a century, USHIO is proud to announce the upgrade of its HPL+ lamp series‘ for ETC’s Source Four theatre lighting fixtures and rigging systems. Originally developed by USHIO to ETC’s specifications, the latest highly-efficient incarnation benefits from the addition of a new ceramic heat sink base. The true innovation, however, is the ultra-compact filament geometry which generates 20% more light from the same fixture in comparison to the previous lamp design. At just 6.0mm x 9.5mm, USHIO’s new filament profile is a match for the innovative demands displayed by the engineers at ETC’s Source Four development team. Combining this small but powerful element with the dichroic reflector and quality optical system of Source Four fixtures generates the ultimate axial and radial light distribution. To cement the connection between these two powerful lighting equipment manufacturers, ETC have publicly endorsed USHIO’s expertise and will display their company logo, alongside that of USHIO, on all HPL+ Ceramic lamp packaging from now on.

From its humble beginnings and a dash of youthful determination, Electronic Theatre Controls (ETC) grew from the inspired minds of the late Fred Foster, his brother Bill, and two friends, James Bradley and Gary Bewick. In 1975, the fresh-faced students pitched their idea of a state-of-the-art lighting console to their college professor, exclaiming that they were going to sell the console to the prestigious Metropolitan Opera House, also known as the Met. After twenty years of award winning innovation, the team realised their dream in 1996 when the historic New York entertainment venue finally placed an order for one of their consoles. Since then, ETC has gone on to become the market leader in the production of theatre, film, studio, and architectural lighting systems. In particular, they are best known for their contribution to stage lighting technology in elite entertainment venues across the world.

Two years prior to achieving their dreams at the Met, ETC teamed up with USHIO in 1994 to produce a HPL lamp based on ETC’s own designs. Intended as the crucial light emitting component in their ellipsoidal reflector spotlights (ERS), ETC gained comfort in the knowledge that USHIO’s expertise could bring their HPL vision to reality. Working together to optimise the output of the resulting Source Four series has cultivated countless improvements that have advanced theatre lighting to the standards enjoyed by audiences and performers to this day. The first HPL+ was released in 2002, with notable improvement to the filament spacing for wider light distribution and the addition of a ceramic base for the first time. In 2016, the average operating lifetime of the HPL+ lamps was increased to 3000 hours with the introduction of Super Long Life HPL. Now this extended longevity is coupled with the super-enhanced lumen output which defines the current USHIO HPL+ Ceramic for ETC’s Source 4 stage lighting fixtures. 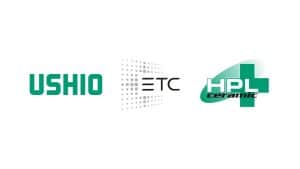