Ushio has announced the release of a new record-breaking version of its Epitex SMBB1050GD 1,050 nm short wavelength infrared (SWIR) LEDs. Available in single or multi-chip form, each gallium arsenide (GaAs) chip is capable of a record optical output power of 700 milliwatts (mW) at 1 Ampere (continuous wave, CW), or 1,200 mW at 2 A (pulsed). This incredible optical output power can reach up to 3,700 mW when taking advantage of the SMBB family multi-chip package options, which allow up to three chips at the same time, along with an optional ceramic insulator, in the same package. 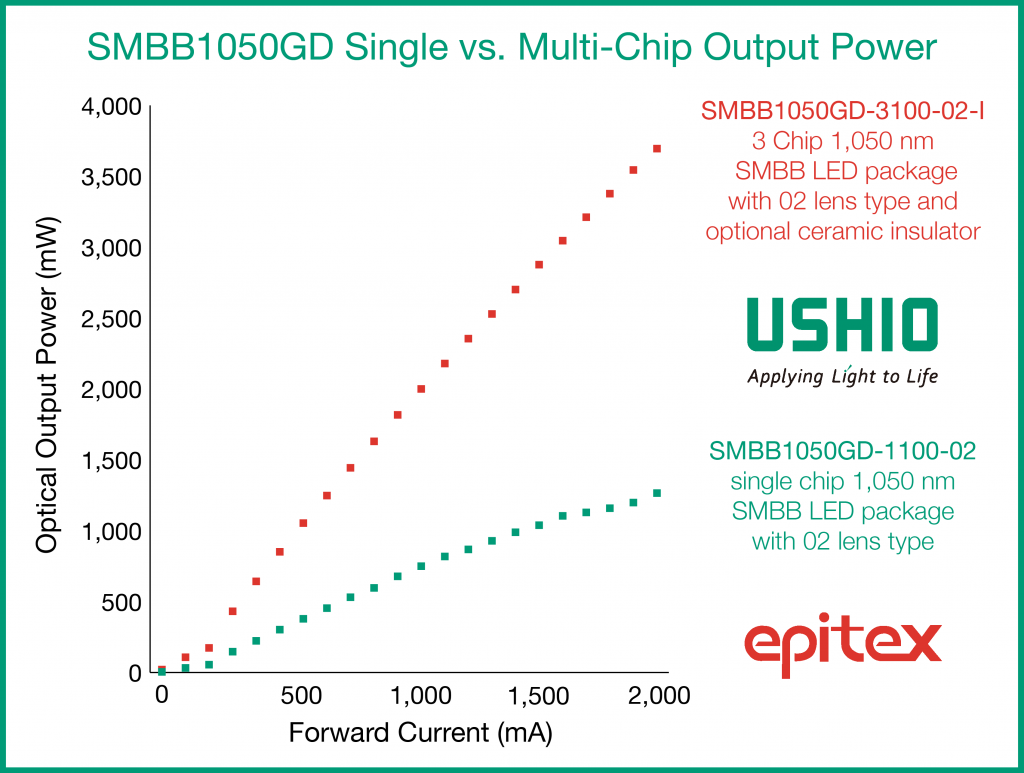 This latest accolade for the SMBB LED family comes after a flurry of world firsts and broken records in recent years. In 2019, Ushio continued to develop its broadband Spectro series, culminating in the world’s highest hyperspectral (500 nm – 1,000 nm) pulsed optical output for an LED, at 160 mW. Spectro LEDs are ideal for a number of analytic, detection, and diagnostic applications; while also offering a vastly improved lifetime when compared to the conventional halogen lamps on the market.

In 2020, that achievement was followed by the emergence of the indium gallium arsenide phosphide (InGaAsP) Epitex D Series, which realised the highest ever output power and efficiency in the world. Further reading on the release of the D Series, and a comparison to the previously released Epitex S Series, can be found here.

The 1 mm2 SMBB1050GD chip is attached to the package through the use of conductive adhesive, silver plating, onto the copper heatsink. The basic SMBB1050GD package, with a flat silicone resin lens, has a total output power of 700 mW (CW). The flat lens can be swapped out for a number of different options, to modify the intensity and distribution of the emitted radiation. This basic construction runs throughout the SMBB family, allowing for good heat removal capabilities and a wide selection of lenses suitable for a whole host of applications. 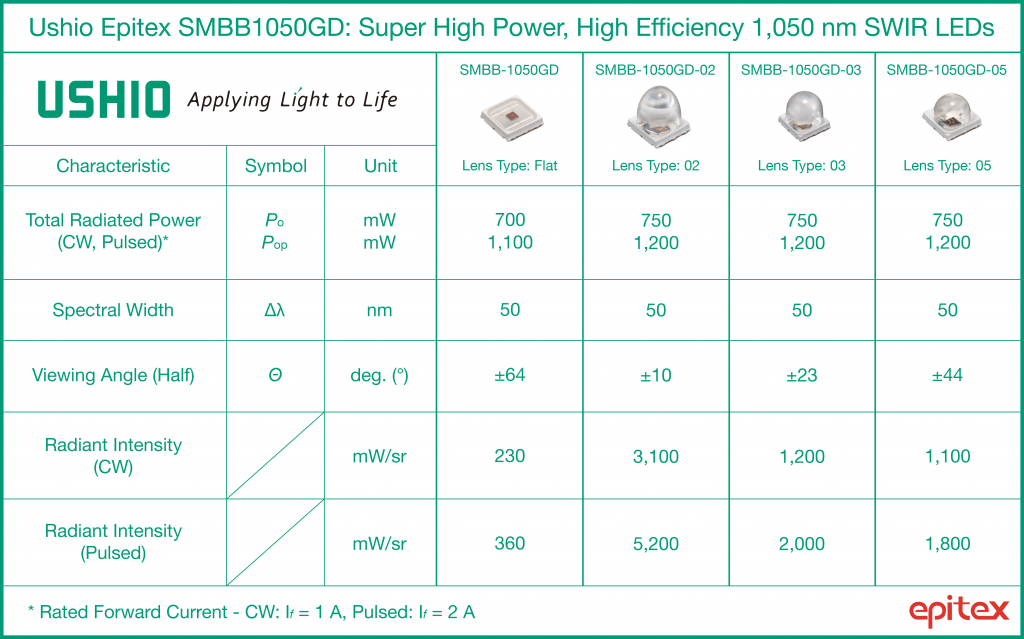 The flat and 05 lens types allow the radiation output to be emitted from the SMBB package at a broader angle. This produces a less-focused, lower radiant intensity light, but the width of illumination will be far greater. In the case of the SMBB1050GD, the flat and 05 lens types provide 230 mW/sr (milli-Watts per steradian) and 360 mW/sr, respectively.

For applications requiring a highly-focused, high-intensity output, the 02 and 03 lens types tighten the radiant beam and channel the output power into a narrower, intensified angle. The 02 lens type provides the highest intensity as the SWIR rays are crammed into an angle of ±10°, strengthens the radiant intensity to 3,100 mW/sr (CW), or 5,200 mW/sr when pulsed. 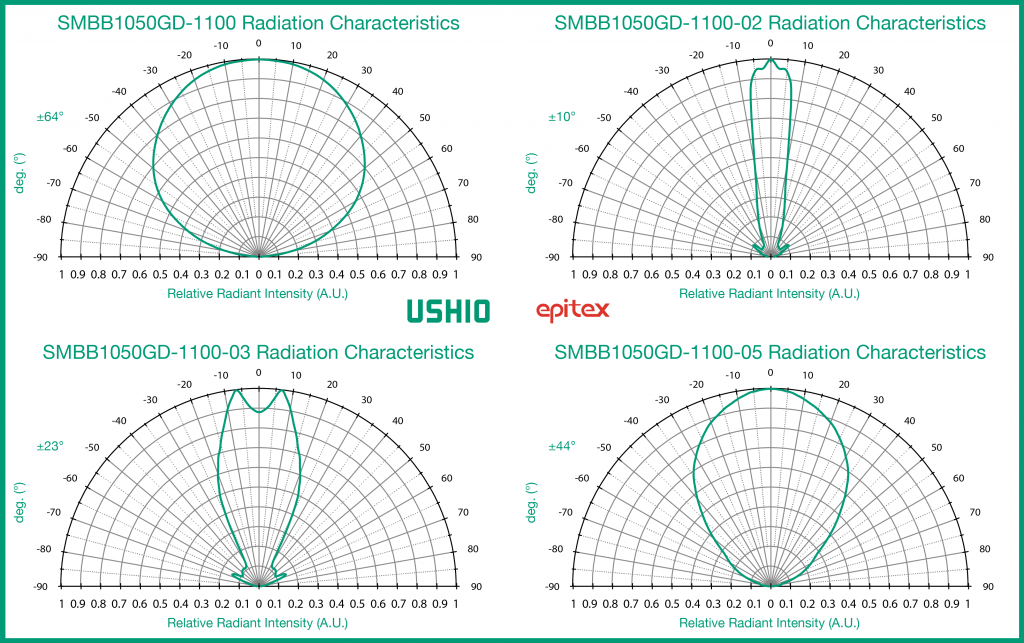 We previously released an article outlining the use of near infrared (NIR) LEDs in automatic number plate recognition (ANPR), however Ushio’s 1,050 nm LEDs have a part to play in a slightly more complex type of machine vision. Rather than simply providing a means of all-weather illumination, as in the case of ANPR, SMBB1050GD LEDs can be combined with an SWIR camera or sensor to differentiate between different materials.

Every material, whether organic or man-made, has a different molecular and chemical composition. Different structures reflect or absorb SWIR rays to varying degrees and this enables us to teach machines to identify items in a sorting process. Many organic materials absorb most of the rays in the 1,000 nm to 1,750 nm wavelength range. If more rays are absorbed, as in the case of materials with high moisture content like fruit and vegetables, a darker image will appear when captured by an SWIR imaging device; by contrast, materials or substances which reflect more rays will appear brighter. This type of spectroscopy can be used to detect and measure water content to separate fruit from foreign objects on the production line, or to differentiate between the various polymers present in a plastic recycling facility.

Once the expected 1,050 nm absorbency has been measured and fed into the machine sorting software, the machine can be instructed to either accept or reject anything which passes its view with the corresponding level of light absorbency. This can also be used in product quality control to identify items which are of the correct material, but have suffered damage prior to the sorting process. A common example of this process is in-line fruit sorting. An apple may have a bruise under the skin which is not visible to the human eye, but SWIR vision can reveal this defect to the sensing device and trigger the removal of the apple from the production line without requiring a person to track it down manually. This moisture detection ability even allows the ripeness of various produce to be measured and taken into account when travelling down a conveyor belt.

While the 1,050 nm wavelength is ideal for moisture-based food sorting, Ushio offers a wide range of LEDs for SWIR applications with all wavelengths covered from 1,000 nm to 1,750 nm. For applications outside of the infrared region, the Epitex LED collection also spans visible and ultraviolet (UV) light, right down to 365 nm. Full specifications of each diode can be found in our online LED library.

Contact Ushio for help with your LED and laser diode enquiries

To begin your EMEA sales enquiries regarding Epitex SWIR LEDs, Ushio Europe’s SSL Sales Director, Ardan Fuessmann, can be reached via our contact page. When you are ready, Mr. Fuessmann will be readily available to discuss all of your solid state lighting needs and is more than happy to guide you through our entire LED and laser diode portfolio. 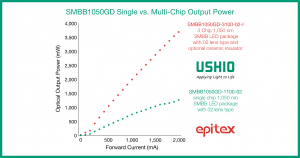