As the market leading manufacturer of speciality light sources, USHIO provide bespoke solutions for a multitude of industrial processes. USHIO is already well respected within the realm of the conventional UV and IR lamps, and its mastery of surface science has extended the possibilities of increased material bonding and coating adhesion through its pioneering excimer lamps and UV LEDs. The relatively young composite materials industry has permeated every aspect of daily life, and industries looking to capitalise on this will be well aware of how USHIO can increase the quality and cut the costs of their manufacturing processes.

USHIO has seen a huge increase in enquiries regarding its excimer solutions, which last year culminated in a popular appearance at LOPEC 2019. The biggest annual large-area, organic, and printed electronics conference in the world takes place in Munich, and 2020 is no exception with over 160 exhibitors registered to appear this year. Making a triumphant return after the success of the previous edition, USHIO’s in-house excimer specialists include Mr Esmat Jawad and Dr Jörg Söllner, who will be on hand with a live ExciJet demonstration kit.

Visitors to the booth will witness a short display of excimer’s surface activation capabilities, as polymer substrates are treated with an USHIO ExciJet 172nm lamp to imbue the surface with a number of industrially desirable properties. The live demonstration is typical of the applications tested at the USHIO Excimer Innovation Laboratory, and serves as an illustration of the simple set of processes USHIO follow to ensure optimal standards for your bespoke implementation of excimer technology.

As smart devices increasingly permeate our daily lives, the manufacturers behind this fast growing sector find themselves at the pinnacle of engineering innovation. Setting up shop at booth 209 of Munich Trade Fair Centre’s hall B0, USHIO will present their latest game-changing technology at the LOPEC 2020 meeting of printed electronics industry leaders. The intensifying impact of flexible microelectronic gadgets grows by the day, and Ushio Europe is one such firm to have taken the initiative by becoming a market dominating provider of circuit-safe surface science solutions.

With regular and popular appearances at trade shows such as JEC World, Composites Europe, InPrint, K 2019, and LOPEC, USHIO is stepping up its commitment to finding a unique solution to each customer’s needs. This is no more evident than with the construction of USHIO’s Excimer Innovation Laboratory. The Japanese multinational, which entered the European market in 1985, can now bring the development of vacuum-ultraviolet (VUV) applications to the fore.

Attracting visitors to its Ushio Deutschland facility in Steinhöring, Germany, prospective clients are welcomed with an exclusive opportunity to explore, develop, implement, and improve industrial processes. Now commanding more than 95% of the worldwide excimer lamp market, USHIO are sending a clear signal of their intention to lead from the front, by providing a full research & development service to their clients. This expansion of the European testing facility, shared with eminent horticultural subsidiary BLV, follows the success of similar IR and UV ventures by Ushio, Inc. in Japan, and Ushio America.

The simple clean room concept is designed to put prospective excimer solutions through their paces, with each set of tests run with the intention of optimising one specific application. The only responsibility left for the client is to send, or show up at the lab with, relevant material samples for the tests. The in-house experts at Steinhöring design unique solutions in direct cooperation with the client, handing control to them to get the result they need, but maintaining a level of mentorship when needed.

Excimer has already begun generating significant interest from aerospace and automotive firms who wish to explore the weight reduction possibilities of Photobonding™ and the elimination of adhesives. Dielectric barrier discharge excimer lamps hold a unique ability to bond materials, such as polymers and glass, without epoxy or other chemicals. By pressing two non-identical substrates together during treatment, a permanent bond is formed at a low pressure & temperature.

VUV light also enjoys a rather shallow penetration depth which leaves a thin polymerised film on the upper layer of UV-curable coatings. This effect leaves deeper layers unaffected, yet the resulting shrinkage leaves behind a homogeneous matted finish and brings scratch resistance to composite coatings.

USHIO’s mastery of VUV irradiation techniques has eliminated the surface activation / modification issues plaguing top electronics manufacturers since long before circuit-based technology became a wearable commodity. So, what is the problem? The ever-present threat of static overload during production, mostly, yet this technology also brings significant benefits to traditional printing techniques too.

Tried-and-tested surface modification techniques, such as corona and atmospheric plasma, rely on a significant electrical discharge in order to irradiate the substrate. Their widespread use within industrial manufacturing is a credit to their ability to imbue a surface with desirable properties, for example, a significant improvement in contact wettability. The downside of these methods appears in the form of a destructive molecular bombardment, which is the direct result of the brutal discharge reaction released directly upon the substrate.

Effectively frying any microelectronics contained within close proximity to the treated material, the high energy molecular impact of these treatments will permanently damage sensitive materials, such as nanocomposite foils. While the damage is invisible to the naked eye, far reaching issues become more apparent by inspecting the treated surface through an electron microscope. Studying the effects of corona and plasma treatment in this way, will reveal a moon-like cratered surface which lacks any sense of homogeneity.

While the surface is still ‘activated’, this comes at a great cost to the effectivity of the treatment by the diminished structural integrity of the surface. A good example is the longevity of ink adhesion when printing credit cards and other such applications. A smooth or homogeneously matted surface is able to retain a far greater ink adhesion, for longer, than an uneven or roughly treated one.

Additionally, the static discharge present in many surface treatments has been known to attract dust to a surface from several metres away. If the dust is still present on the substrate surface when ink, paint, resin, or varnish is applied, there is a danger of the deployed substance wetting and bonding to the dust rather than the surface. Subsequently, any hydrophilic properties imparted to the surface are lost when the unwanted debris inevitably falls away, taking the deployed substance along with it.

USHIO has devoted significant resources to the exploration of excimer applications over the past 25 years, as it sought to eradicate these problems by creating a solution which confines the high-energy discharge within a modular lamp and releases only low-temperature, high-energy electrons to treat the surface. The results of this commitment will be presented for all to see at LOPEC 2020.

Amongst other potential leaps which could be facilitated by excimer, interest is gathering as current electronic device manufacturing standards look set to give way to the development of completely free-form 3D printed structural electronics technology. The future of excimer-treated printed electronics envisions super-flat heating elements printed directly onto the inside of car seats and panels; external vehicular LEDs will be embedded into film coatings which follow the curve of any surface on which you wish to apply them; the hydrophilisation of polymer substrates in order to prepare them for the application of metal printed circuit patterning – directly built into the object rather than contained within a cavity inside it.

USHIO’s other excimer technology, the VUV-Aligner, has enabled printable patterning in the production of organic transistors, sensors, and bio-devices. The PCB industry was shaken by USHIO’s successful introduction of the world’s first collimated light aligner using vacuum-ultraviolet lamp technology. Able to achieve high-precision pattern formation through the use of hydrophilic VUV patterning methods, the technology is credited with paving the way for new applications including the production of bio-chips. The low temperature VUV process has even managed to exclude the developing, etching, and resist removal stages from conventional lithography used in semiconductor production.

Available for your questions during the LOPEC exhibition, taking place at Messe München on 25 – 26 March 2020, the Ushio Europe team will be holding live surface activation demonstrations with the popular ExciJet module throughout the show. Should you wish to learn more about excimer and its comparison with other established technologies, you can visit USHIO’s online educational resources: 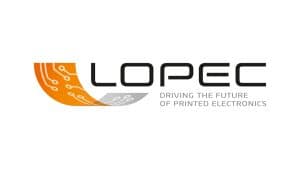 PrevUSHIO unveil 660nm Single-Mode High-Power Red Laser Diode
What would have happened at DRUPA 2020?Next