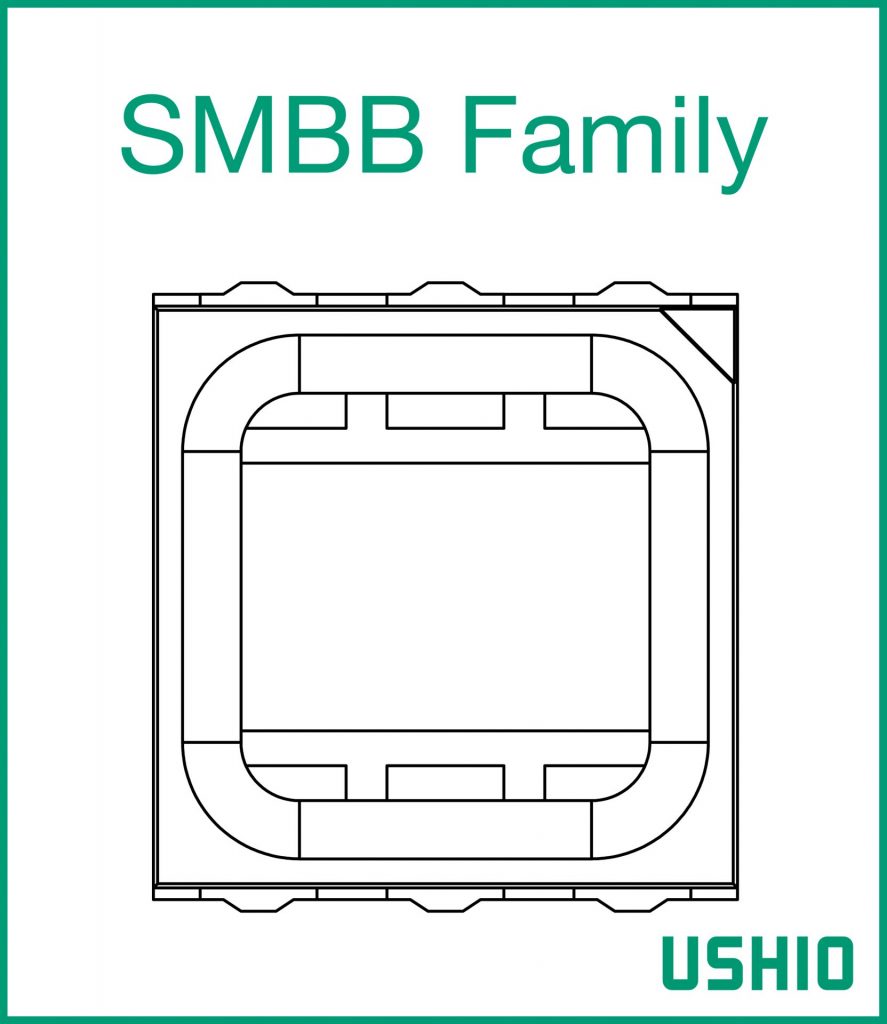 Epitex LEDs comprise the largest available collection of light emitting diodes on the market. Spanning violet (UV), visible, and infrared (IR) wavelengths, this vast opto-electronics catalogue makes Ushio the one stop shop for single and multi-wavelength LEDs. With a renowned devotion to offering customisation and optimisation options that cannot be found anywhere else, Ushio offers an unprecedented product choice and the ability to modify each solution to a specific application. Whether you require a single high-power chip, or up to three chips each emitting a different wavelength, Ushio can find the right combination to achieve your ultimate goals.

A force to be reckoned with: Epitex SMBB LEDs

As the flagship Epitex ‘family’ of LEDs within Ushio’s variety of products, the SMBB family is perhaps the most versatile set of LEDs on the market. With a copper heat sink equipped 5 mm x 5 mm package, these record-breaking TOP LEDs are available in single or multi-chip form.

This means operators can have a single 1 mm x 1 mm high-powered chip at their disposal, emitting a single wavelength between 365 nm and 1650 nm; or mount up to three chips of differing wavelengths in order to achieve the desired results. If an application requires even more power, the multi-chip SMBB can also be mounted with up to three chips of the same wavelength to achieve up to triple the output. To squeeze even more functionality out of your SMBB package, a photodiode can be included to allow simultaneous applications within one LED. One example of this multi-tasking package type is the ability to emit and detect light with in single 5 mm x 5 mm footprint. 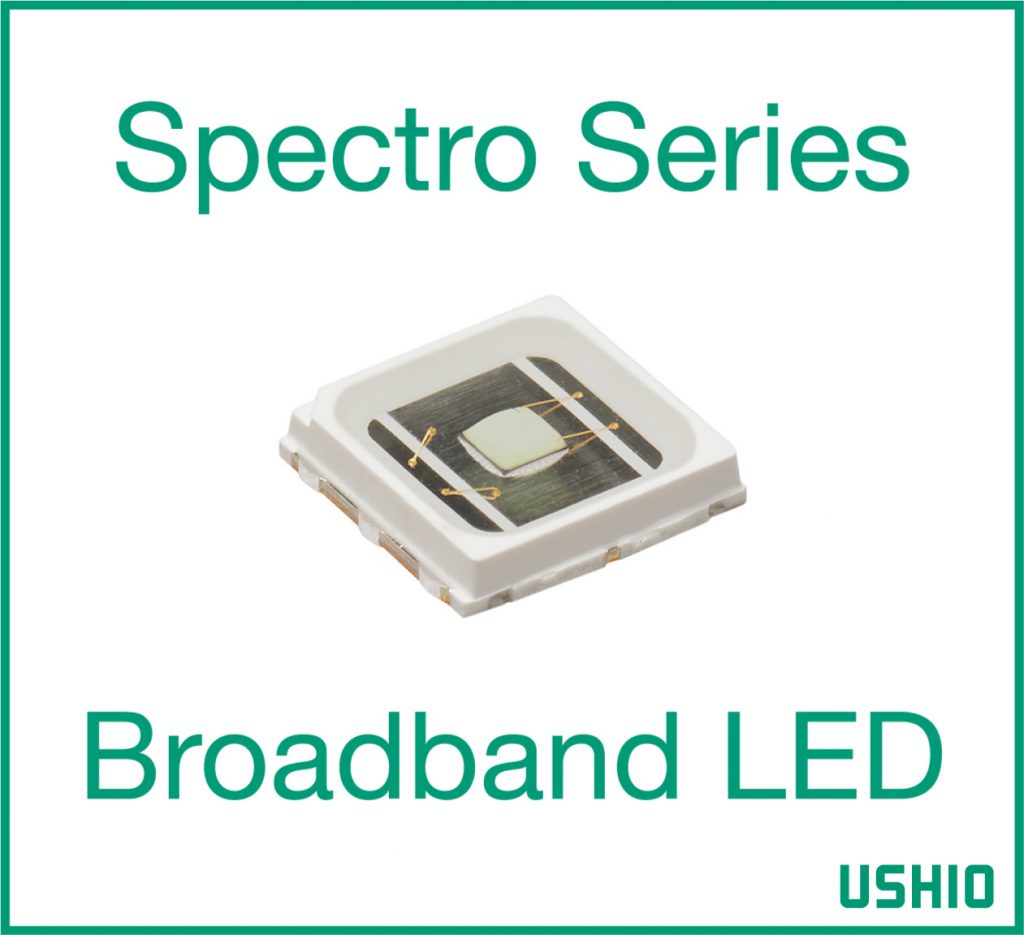 Within the ranks of the SMBB family, there are some star players which have achieved a number of world firsts. 2019 saw Ushio continue the development of the Spectro broadband LED series, which attained the world’s highest hyperspectral optical output for an LED, at 160 mW. Boasting a far longer lifetime than conventional halogen lamp counterparts, Spectro LEDs are ideal for a number of analytic, detection, and diagnostic applications.

In 2020, the Epitex D-Series LEDs burst onto the scene, with the world’s highest output power and efficiency ever achieved by a short wavelength infrared (SWIR) LED series. The D-Series has opted for a variety of semiconductor materials in order to find the perfect chip material for each wavelength. A wide range of semiconductor materials are selected depending on the wavelength required, including aluminium gallium arsenide (AlGaAs), aluminium gallium indium phosphide (AlGaInP), aluminium gallium indium nitride (AlGaInN), and indium gallium arsenide phosphide (InGaAsP). InGaAsP is used to emit the SWIR wavelengths beyond 1000 nm, up to the 1650 nm region.

The main bonus to be found by choosing Ushio’s Epitex SMBB LED family is the access to the high-power chips. Using a lower power chip can result in failed applications where the receiver component is not getting enough light to do its job. Perhaps that could be detecting the transmittance of an object for a sorting process, or you simply just need more power from your LED in order for the light to travel a little further.

Focus on the application with the SMBB LED lens selection

Having a record-breaking single or multi-chip SMBB LED emitting the perfect wavelength is not always enough. For every usage discovered for this technology, a different method is needed to concentrate the radiation correctly and channel it in the most fitting way for the application. Some are best suited to a wide beam of light, while others require a tightly focused angle. Ushio has overcome these issues by developing a series of silicone resin lenses. The lenses are designed to correct the radiation characteristics of the LED, depending on the application in mind.

For example, the SMBB850DS series has a total output power of 1400 mW, while the intensity of the emitted radiation remains dependant on the chosen lens. The flat and 05 lens types allow the radiation output to be emitted from the SMBB package at a broader angle, thereby achieving a less-focused, lower radiant intensity. In the case of the SMBB850DS, the flat and 05 lens types provide 460 mW/sr (milli-Watts per steradian) and 2000 mW/sr, respectively. For applications requiring a highly-focused, high-intensity output, the 02 and 03 lens types tighten the radiant beam and focus the output power at a narrower, intensified angle. The 02 lens type, in particular, provides a very high intensity as the light is crammed into an angle of ±10° to intensify the output up to 6000 mW/sr.

While the SMBB family takes home the most prizes, sometimes Ushio’s clients are looking for a single-chip package with a smaller footprint. Of course, Ushio would not want to compromise the high-power offerings from the SMBB class, so the EDC family was developed. Offering the same UV to SWIR range as the SMBB packages, EDC LEDs bring the true benefits of miniaturisation by taking up a space of just 3.5 mm x 3.5 mm.

An EDC package features a ceramic base, which serves as an ideal heatsink, and provides excellent isolation from the circuit. The EDC family is mounted with a single 1 mm x 1 mm chip to remain capable within the same applications as single-chip SMBBs. Equally, all wavelengths between 365 nm and 1650 nm are achieved. The key difference, however, comes in the form of the smaller footprint, which allows extra room for more LED packages or the addition of other components in need of more space.

The EDC family can be customised with one of two lens types, flat and S5. As expected, the flat lens type has a wide ±66° angle. This angle ensures a wide spread of light radiating from an LED, such as the EDC810DS-1100, yet still manages an intense 400 mW/sr from a total radiated power of 1200 mW.

The S5 type lens is unique to the EDC family and has a narrower angle of ±39°. When integrated into the EDC810DS-1100-05 package, the S5 lens concentrates the light into a narrower beam, increasing the radiant intensity to a powerful 1800 mW/sr.

Aside from the standard EDC packages on display here, Ushio is also developing the ceramic-based EDCF multi-chip family.

The tip of the solid state iceberg

With roles to play in diverse fields such as automotive, imaging, illumination, industrial processing, sensing, and a wide range of sciences, Ushio’s Epitex LEDs stretch far beyond the SMBB and EDC families. Having built an ethos based on in-house development and manufacturing, Ushio has truly mastered the art of solid state lighting (SSL). From the domed IRED series providing key machine and robotics components, to Stem Type, TO-66, and multi-wavelength LEDs, Ushio has the answer to the needs of every customer.

On the other side of the SSL world, Ushio is also extremely active in the development of high quality laser diodes (LD). With record-breaking optical output power up to 2400 mW, Ushio’s lasers are widely used in bio-engineering, bio-medical, display, printing, and sensing applications. Typically, Ushio’s LD technology falls into the wavelength band between 375 nm and 850 nm.

Ushio’s all-encompassing expertise in the field brings various opportunities to customise chip and packaging technologies such as the chip design, epitaxial growth, device process, optical design, thermal management, and electrical & mechanical design. Beyond solid state lighting, Ushio has over half a century of experience in the manufacture and customisation of device and optical technologies. With this unrivalled knowledge and the willingness to sit down with customers to find the most suitable, bespoke solution to their needs, Ushio has been established as the trusted partner of companies and clients across the globe.

Contact Ushio for help with all LED and laser diode applications

To begin your EMEA sales enquiries regarding Epitex SWIR LEDs, Ushio Europe’s SSL Sales Director, Ardan Fuessmann, can be reached via our contact page. Mr. Fuessmann is readily available to discuss all your solid state lighting needs and is happy to guide you through our entire LED and laser diode portfolio. 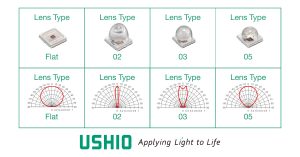